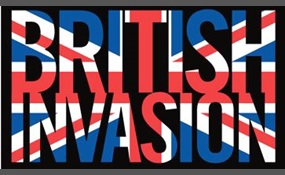 The most famous guitarists of The Big 4 of the British Invasion. Keith of The Stones, Dave of The KinKs, Pete of The Who, and George Of The Beatles!

Pete Townshend- The Who

Peter Dennis Blandford "Pete" Townshend is an English musician, singer-songwriter, and multi-instrumentalist, known principally as the guitarist and songwriter for the rock group the Who. His career with the Who spans 50 years, during which time the...  band grew to be considered one of the most influential bands of the 1960s and 1970s.Townshend is the primary songwriter for the Who, having written well over 100 songs for the band's 11 studio albums, including concept albums and the rock operas Tommy and Quadrophenia, plus popular rock and roll radio staples such as Who's Next, and dozens more that appeared as non-album singles, bonus tracks on reissues, and tracks on rarities compilations such as Odds & Sods. He has also written over 100 songs that have appeared on his solo albums, as well as radio jingles and television theme songs. Although known primarily as a guitarist, he also plays other instruments such as keyboards, banjo, accordion, harmonica, ukulele, mandolin, violin, synthesiser, bass guitar and drums, on his own solo albums, several Who albums, and as a guest contributor to a wide array of other artists' recordings   more
5 votes
2 comments
Pete Townshend- The Who - Voter Comments

Macbethdoesmurdersleep says2017-06-06T02:37:27.3182459Z
Report Post
Can't forget he was the principle songwriter for the Who, and also dived into experimental music and pushed the boundaries of what was the loudest band in the world.

George Harrison, MBE, was an English musician, multi-instrumentalist, singer and songwriter who achieved international fame as the lead guitarist of the Beatles. Although John Lennon and Paul McCartney were the band's primary songwriters, most of th... eir albums included at least one Harrison composition, including "While My Guitar Gently Weeps", "Here Comes the Sun" and "Something", which became the Beatles' second-most-covered song.Harrison's earliest musical influences included Big Bill Broonzy, George Formby and Django Reinhardt; Chet Atkins, Chuck Berry and Ry Cooder were significant later influences. By 1965 he had begun to lead the Beatles into folk rock through his interest in the Byrds and Bob Dylan, and towards Indian classical music through his use of the sitar on "Norwegian Wood". He developed an interest in the Hare Krishna movement and became an admirer of Indian culture and mysticism, introducing them to the other members of the Beatles and their Western audience by incorporating Indian instrumentation in their music. After the band's break-up in 1970, Harrison released the triple album All Things Must Pass, from which two hit singles originated   more
3 votes
0 comments
George Harrison- The Beatles - Voter Comments
No Comments
Vote & Comment
3

David Russell Gordon "Dave" Davies is an English musician, a multi-instrumentalist best known for his role as lead guitarist and vocalist for the English rock band The Kinks, which also features his brother Ray Davies.In 2003, Davies was ranked 91st...  in Rolling Stone magazine's list of the "100 Greatest Guitarists of All Time"   more
0 votes
0 comments
Dave Davies- The KinKs - Voter Comments
No Comments
Vote & Comment
No comments yet.
Leave a comment...
(Maximum 900 words)
Privacy Policy | Terms of Use
Sitemap | View Desktop Version
©2021 Debate.org. All rights reserved.