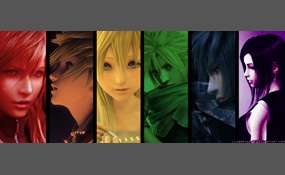 Kingdom Hearts is a series of action role-playing games developed and published by Square Enix. It is a collaboration between Square Enix and Disney Interactive Studios, and is under the direction of Tetsuya Nomura, a longtime Square Enix character ... designer. Kingdom Hearts is a crossover of various Disney settings based in a universe made specifically for the series. The series centers on the main character Sora and his search for his friends and encounters with Disney, Final Fantasy, and The World Ends With You characters on their worlds.The series consists of seven games across multiple video game consoles, and future titles are planned. Most of the games in the series have been both critically acclaimed and commercially successful, though each title has seen varying levels of success. As of October 2013, the Kingdom Hearts series has sold over 20 million copies worldwide. A wide variety of related merchandise has been released along with the games, including soundtracks, figurines, companion books, novels, and manga series   more
5 votes
0 comments
Kingdom Hearts - Voter Comments
No Comments
Vote & Comment
2

Final Fantasy is a media franchise created by Hironobu Sakaguchi, and is developed and owned by Square Enix. The franchise centers around a series of fantasy and science fantasy role-playing video games, but includes motion pictures, anime, printed ... media, and other merchandise. The eponymous first game in the series, published in 1987, was conceived by Sakaguchi as his last-ditch effort in the game industry; the title was a success and spawned sequels. The video game series has since branched into other genres such as tactical role-playing, action role-playing, massively multiplayer online role-playing, racing, third-person shooter, fighting, and rhythm.Although most Final Fantasy installments are stand-alone stories with different settings and main characters, they feature identical elements that define the franchise. Recurring elements include plot themes, character names, and game mechanics. Plots center on a group of heroes battling a great evil while exploring the characters' internal struggles and relationships. Character names are frequently derived from the history, languages, and mythologies of cultures worldwide   more
5 votes
2 comments
Final Fantasy - Voter Comments