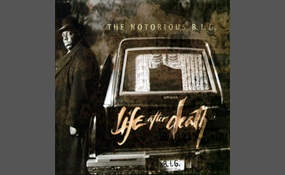 In philosophy, religion, mythology, and fiction, the afterlife is the concept of a realm, or the realm itself, in which an essential part of an individual's identity or consciousness continues to exist after the death of the body in the individual's...  lifetime. According to various ideas about the afterlife, the essential aspect of the individual that lives on after death may be some partial element, or the entire soul or spirit, of an individual, which carries with it and confers personal identity. Belief in an afterlife, which may be naturalistic or supernatural, is in contrast to the belief in oblivion after death.In some popular views, this continued existence often takes place in a spiritual realm, and in other popular views, the individual may be reborn into this world and begin the life cycle over again, likely with no memory of what they have done in the past. In this latter view, such rebirths and deaths may take place over and over again continuously until the individual gains entry to a spiritual realm or Otherworld. Major views on the afterlife derive from religion, esotericism and metaphysics   more
11 votes
1 comment
Afterlife - Voter Comments

7 votes
3 comments
Not Sure - Voter Comments

Kreakin says2015-03-31T15:18:20.4585067-05:00
Report Post
Speculation with nothing at all to go on is a total waste of time. I could speculate that the room is filled with matterless invisible aliens watching me but there is no reason to. I have no reason to waste time on it.