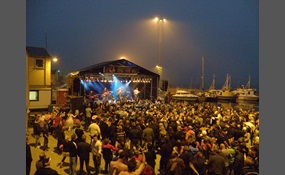 Linkin Park, For Minor or Puddle of Mudd?

My Chemical Romance was an American rock band from New Jersey, formed in 2001. The band consisted of lead vocalist Gerard Way, guitarists Ray Toro and Frank Iero, and bassist Mikey Way. Shortly after forming, the band signed to Eyeball Records and r... eleased their debut album I Brought You My Bullets, You Brought Me Your Love in 2002. They signed with Reprise Records the next year and released their major label debut Three Cheers for Sweet Revenge in 2004; the album was a commercial success, and was awarded platinum status a little over a year later.The band eclipsed their previous success with their 2006 concept album, The Black Parade, which gained generally favorable reviews among music critics. Their fourth studio album, Danger Days: The True Lives of the Fabulous Killjoys, was released on November 22, 2010, to positive reviews. The band's final release was a series of singles, released over the course of five months, collected on the compilation Conventional Weapons. The band announced its break-up on March 22, 2013, one month after the final release in the Conventional Weapons series. A greatest hits collection entitled May Death Never Stop You was released on March 25, 2014   more
3 votes
0 comments
My Chemical Romance - Voter Comments
No Comments
Vote & Comment
2

Green Day is an American punk rock band formed in 1987. The band consists of lead vocalist and guitarist Billie Joe Armstrong, bassist and backing vocalist Mike Dirnt, drummer Tré Cool and guitarist and backing vocalist Jason White, who became a ful... l member after playing in the band as a session and touring guitarist for 13 years. Cool replaced former drummer John Kiffmeyer in 1990, prior to the recording of the band's second studio album, Kerplunk.Green Day was originally part of the punk scene at the DIY 924 Gilman Street club in Berkeley, California. The band's early releases were from the independent record label Lookout! Records. In 1994, its major label debut Dookie released through Reprise Records became a breakout success and eventually sold over 10 million copies in the U.S. Green Day was widely credited, alongside fellow California punk bands Sublime, Bad Religion, The Offspring and Rancid, with popularizing and reviving mainstream interest in punk rock in the United States.Green Day's three follow-up albums, Insomniac, Nimrod, and Warning did not achieve the massive success of Dookie, though they were still successful, with Insomniac and Nimrod reaching double platinum and Warning reaching gold status. The band's rock opera, American Idiot, reignited the band's popularity with a younger generation, selling five million copies in the United States. The band's eighth studio album, 21st Century Breakdown, was released in 2009 which achieved the band's best chart performance to date. 21st Century Breakdown was followed up by a trilogy of albums called ¡Uno!, ¡Dos!, and ¡Tré! Released in September, November and December 2012 respectively   more
2 votes
0 comments
Green Day - Voter Comments
No Comments
Vote & Comment
3

Linkin Park is an American rock band from Agoura Hills, California. Formed in 1996, the band rose to international fame with their debut album Hybrid Theory, which was certified Diamond by the RIAA in 2005 and multi-platinum in several other countri... es. Their following studio album Meteora, continued the band's success, topping the Billboard 200 album chart in 2003, and was followed by extensive touring and charity work around the world. In 2003, MTV2 named Linkin Park the sixth-greatest band of the music video era and the third-best of the new millennium. Billboard ranked Linkin Park No. 19 on the Best Artists of the Decade chart. The band was recently voted as the greatest artist of '00s in a Bracket Madness poll on VH1.Having adapted nu metal and rap metal to a radio-friendly yet densely layered style in Hybrid Theory and Meteora, the band explored other genres in their next studio album, Minutes to Midnight. The album topped the Billboard charts and had the third-best debut week of any album that year. The band continued to explore a wider variation of musical types in their fourth album, A Thousand Suns, layering their music with more electronic sounds and beats. Their most recent work, Living Things, combines musical elements from all of their previous records. They are currently working on their sixth studio album, entitled The Hunting Party, set to be released on June 17, 2014, which the band has stated will feature a heavier rock sound compared to their recent ventures. The band has collaborated with several other artists, most notably with rapper Jay-Z in their mashup EP Collision Course, and many others on Reanimation and Recharged. Linkin Park has sold over 60 million albums worldwide and has won two Grammy Awards   more
2 votes
0 comments
Linkin Park - Voter Comments
No Comments
Vote & Comment
4

Puddle of Mudd is an American post-grunge band from Kansas City, Missouri. To date the band has sold over seven million albums, and have had a string of No. 1 mainstream rock singles in the United States. Their major-label debut Come Clean has sold ... over five million copies. They have released two independent and four major albums, with their latest being Volume 4: Songs in the Key of Love & Hate in December 2009, and their latest compilation album being re:overed, released in August 2011   more
0 votes
0 comments
Puddle of Mudd - Voter Comments
No Comments
Vote & Comment
No comments yet.
Leave a comment...
(Maximum 900 words)
Privacy Policy | Terms of Use
Sitemap | View Desktop Version
©2021 Debate.org. All rights reserved.