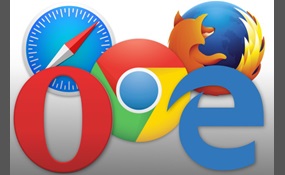 Which is the better browser

Chrome used to be a fast engine but now has memory leaks and massive crashing issues. It has not been updated in years which allowed every other browser to catch up to it and pass it. People only use Chrome because it used to be good so many years a... go   more
18 votes
6 comments
Google Chrome - Voter Comments

Varrack says2015-08-21T16:43:17.8661997Z
Report Post
Those biased descriptions make me laugh. Anyways I use Chrome because its interface is pretty good and it's widely used. It also has some helpful plugins/addons. There's a few issues, but overall I prefer it to anything else.

C.Weaver says2015-09-06T22:45:00.2964394Z
Report Post
I prefer Google Chrome due to the fact that it is more flexible with your opinion on how you want a web browser. you can add proxxy's (or however you spell it) to enhance your browser. it can also link to your accounts on social medias, emails, etc. so everything will be all together and easy to find.

BasedCereal says2015-10-17T22:44:29.4348471Z
Report Post
Most people who complain about chrome's usage of memory tend to have this problem because of their extensions (namely adblock plus). I use several extensions, namely ublock origin and tampermonkey and I never have problems with RAM usage. Being that I'm a tab-fiend, and use two monitors with multiple windows open, I still never have lag or memory limitations with chrome. I also never crash with it, which is something I can't say about firefox. Besides, with chrome, every tab is its own process. If you crash one tab, only that tab dies. If you crash one tab with firefox, every other tab goes along with it. I'll admit that I don't use microsoft edge, as it has a less enjoyable interface and lacks the add-ons I need. Firefox used to be my go-to browser until they shifted to that god awful chrome lookalike ui. Instead I use cyberfox with the old fashioned ui. Cyberfox is a very solid browser, especially since 50 tabs don't turn into illegible pins. Instead you can scroll through your tabs (horizontally). I also like how it takes up less screen real estate than chrome. However, I tend to only use cyberfox for schoolwork or viewing pdf files. I will state that cyberfox is the best browser to use if you have a 144hz monitor. Firefox's implementation of smooth scrolling is unmatched.

Mozilla Firefox is a free and open-source web browser developed for Windows, OS X, and Linux, with a mobile version for Android, by the Mozilla Foundation and its subsidiary, the Mozilla Corporation. Firefox uses the Gecko layout engine to render we... b pages, which implements current and anticipated web standards.As of February 2014, Firefox has between 12% and 22% of worldwide usage, making it, per different sources, the third most popular web browser. According to Mozilla, as of December 2014 Firefox counts half a billion users around the world. The browser has had particular success in Indonesia, Iran, Germany, and Poland, where it is the most popular browser with 55%, 46%, 43%, and 41% of the market share, respectively   more
3 votes
0 comments
Firefox - Voter Comments
No Comments
Vote & Comment
Leave a comment...
(Maximum 900 words)

TBR says2015-08-21T16:52:01.6936184Z
Report Post
Well, as usual its hard to be black and white about this. Edge is (going to be) a great improvement in how you work with the web. Chrome, for me, was a great improvement in striped down standards compliant browsing. Chrome has lost a lot of that. For Chrome to fulfill some of its expectations, it has naturally grown more complex, and added problems. Short answer, Microsoft is doing just about the coolest stuff right now. Edge is a part of this. The negativity that floats around IE is hang-over and biases carried from experiences decades old.

FreedomBeforeEquality says2015-08-24T15:31:10.1361088Z
Report Post
I want smooth fast simple and secure. You compromise on all of those things if you try to attain any of them in Chrome and Firefox. Plug-ins are the devil. The most striped down and fast versions of both Chrome and Firefox are only marginally faster and take a huge hit in security. And the interface is clean clean clean with Edge.

DrEvel says2015-11-14T06:16:21.9497064Z
Report Post
Edge can be a hundred times faster than Chrome and it means nothing. You are bombarded with ads and the only useful app you can get, the one that removes the ads, you pay for every year.
Privacy Policy | Terms of Use
Sitemap | View Desktop Version
©2021 Debate.org. All rights reserved.