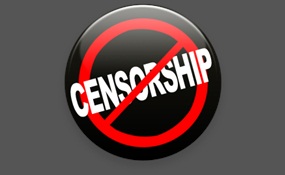 Most biased "democratic country" in terms of news and history books

You always complain about censorship from china, russa, and north korea, but which "western" country is the most biased in history books and news?

The United States of America, commonly referred to as the United States, America, and sometimes the States, is a federal republic consisting of 50 states and a federal district. The 48 contiguous states and Washington, D.C., are in central North Ame... rica between Canada and Mexico. The state of Alaska is the northwestern part of North America and the state of Hawaii is an archipelago in the mid-Pacific. The country also has five populated and nine unpopulated territories in the Pacific and the Caribbean. At 3.80 million square miles and with around 318 million people, the United States is the world's third- or fourth-largest country by total area and third-largest by population. It is one of the world's most ethnically diverse and multicultural nations, the product of large-scale immigration from many countries. The geography and climate of the United States is also extremely diverse, and it is home to a wide variety of wildlife.Paleo-Indians migrated from Eurasia to what is now the U.S. mainland around 15,000 years ago, with European colonization beginning in the 16th century. The United States emerged from 13 British colonies located along the Atlantic seaboard   more
4 votes
2 comments
United States of America - Voter Comments

Germany, officially the Federal Republic of Germany, is a federal parliamentary republic in western-central Europe consisting of 16 constituent states, which retain limited sovereignty. Its capital and largest city is Berlin. Germany covers an area ... of 357,021 square kilometres and has a largely temperate seasonal climate. With 80.6 million inhabitants, it is the most populous member state in the European Union. Germany is a major economic and political power of the European continent and a historic leader in many cultural, theoretical and technical fields. After the United States, Germany is the second most popular migration destination in the world.Various Germanic tribes have occupied what is now northern Germany and southern Scandinavia since classical antiquity. A region named Germania was documented by the Romans before AD 100. During the Migration Period that coincided with the decline of the Roman Empire, the Germanic tribes expanded southward and established kingdoms throughout much of Europe. Beginning in the 10th century, German territories formed a central part of the Holy Roman Empire   more
2 votes
0 comments
Germany - Voter Comments
No Comments
Vote & Comment
3

The United Kingdom of Great Britain and Northern Ireland, commonly known as the United Kingdom or Britain, is a sovereign state in Europe. Lying off the north-western coast of the European mainland, the country includes the island of Great Britain, ... the north-eastern part of the island of Ireland, and many smaller islands. Northern Ireland is the only part of the UK that shares a land border with another state: the Republic of Ireland. Apart from this land border, the UK is surrounded by the Atlantic Ocean, with the North Sea in the east and the English Channel in the south. The Irish Sea lies between Great Britain and Ireland. The UK has an area of 243,610 square kilometres, making it the 78th-largest sovereign state in the world and the 11th-largest in Europe.The United Kingdom is the 22nd-most populous country, with an estimated 64.1 million inhabitants. It is a constitutional monarchy with a parliamentary system of governance. Its capital city is London, an important global city and financial centre with the second-largest urban area in Europe, and its metropolitan area is the largest in European Union, with a population of about 14 million according Eurostat   more
2 votes
0 comments
United Kingdom - Voter Comments
No Comments
Vote & Comment
4

Canada is a country in North America consisting of ten provinces and three territories. Located in the northern part of the continent, it extends from the Atlantic to the Pacific and northward into the Arctic Ocean. At 9.98 million square kilometres...  in total, Canada is the world's second-largest country by total area and the fourth-largest country by land area. Its common border with the United States forms the world's longest land border.The land that is now Canada has been inhabited for millennia by various Aboriginal peoples. Beginning in the late 15th century, British and French colonies were established on the region's Atlantic coast. As a consequence of various conflicts, the United Kingdom gained and lost North American territories until left, in the late 18th century, with what mostly comprises Canada today. Pursuant to the British North America Act, on July 1, 1867, three colonies joined to form the autonomous federal Dominion of Canada. This began an accretion of provinces and territories to the new self-governing Dominion   more
1 vote
0 comments
Canada - Voter Comments
No Comments
Vote & Comment
5

France, officially the French Republic, is a unitary sovereign state comprising territory in western Europe and several overseas regions and territories. Metropolitan France extends from the Mediterranean Sea to the English Channel and the North Sea... , and from the Rhine to the Atlantic Ocean; due to its shape, it is often referred to in French as l’Hexagone. France is one of only three countries to have both Atlantic and Mediterranean coastlines. France has a population of 66 million. France is a semi-presidential republic with its capital in Paris, the nation's largest city and the main cultural and commercial center. The Constitution of France establishes the country as secular and democratic, with its sovereignty derived from the people.During the Iron Age, what is now France was inhabited by the Gauls, a Celtic people. The Gauls were conquered by the Roman Empire in 51 BC, which held Gaul until 486. The Gallo-Romans faced raids and migration from the Germanic Franks, who dominated the region for hundreds of years, eventually creating the medieval Kingdom of France   more
0 votes
0 comments
France - Voter Comments
No Comments
Vote & Comment
6

Spain, officially the Kingdom of Spain, is a sovereign state located on the Iberian Peninsula in southwestern Europe. Its mainland is bordered to the south and east by the Mediterranean Sea except for a small land boundary with Gibraltar; to the nor... th and northeast by France, Andorra, and the Bay of Biscay; and to the west and northwest by Portugal and the Atlantic Ocean. Along with France and Morocco, it is one of only three countries to have both Atlantic and Mediterranean coastlines. Spain's 1,214 km border with Portugal is the longest uninterrupted border within the European Union.Spanish territory also includes the Balearic Islands in the Mediterranean, the Canary Islands in the Atlantic Ocean off the African coast, three exclaves in North Africa, Ceuta, Melilla, and Peñón de Vélez de la Gomera that border Morocco, and the islands and peñones of Alborán, Chafarinas, Alhucemas, and Perejil. With an area of 505,992 km², Spain is the second largest country in Western Europe and the European Union, and the fifth largest country in Europe   more
0 votes
0 comments
Spain - Voter Comments
No Comments
Vote & Comment
No comments yet.
Leave a comment...
(Maximum 900 words)
Privacy Policy | Terms of Use
Sitemap | View Desktop Version
©2020 Debate.org. All rights reserved.