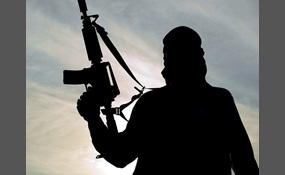 Most dangerous domestic terrorist group in the USA?

I made a list asking if domestic or foreign terror groups are more of a threat to the USA, well people thought domestic was more of a threat. Now my question is what group is the worst? By the way (can't believe I have to say this) ISIL and Al-qaeda aren't US domestic groups!

This terrorist organization spins religious texts to harm others. They often use violence to combat abortion and homosexual activity, as seen in their attacks on gay night clubs and abortion clinics. Their most notorious member, Eric Rudolph, plante... d a bomb at the 1996 Olympic Games in Atlanta, Georgia, killing two people and injuring 150. In 2005, Rudolph explained, without remorse, that the bombing was a necessary action, carried out to criticize the government for its, “abortion on demand” viewpoints. Rudolph has also confessed to the bombings of two abortion clinics and one gay nightclub   more
8 votes
2 comments
Army of God - Voter Comments

I'm sure I missed many group.
5 votes
2 comments
Other - Voter Comments

By far the most notorious organization on this list, the Klu Klux Klan has been wreaking havoc since 1865 with the end of the United States Civil War. Founded by Confederate veterans, the group sought to restore white supremacy by assaulting freed s... laves and those that aided them. They assassinated prominent African Americans, including politicians, religious figures, and community leaders.Today, the Klu Klux Klan focuses on illegal immigrants, homosexuals, urban criminals, and African Americans. The Klan laid forth the groundwork for nearly every white supremacist group that exists today, and as such should be held accountable for their actions as well. This includes the murder and assault of thousands of individuals throughout their history, and frequent property crimes against minority households   more
2 votes
1 comment
Klu Klux Klan - Voter Comments

Aryan Nations is a white supremacist or "white Christian separatist" religious organization originally based in Hayden Lake, Idaho. Richard Girnt Butler founded the group in the 1970s, as an arm of the Christian Identity organization Church of Jesus...  Christ–Christian. The Federal Bureau of Investigation has called Aryan Nations a "terrorist threat", and the RAND Corporation has called it the "first truly nationwide terrorist network" in the US   more
1 vote
0 comments
Aryan Nations - Voter Comments
No Comments
Vote & Comment
5

Westboro Baptist Church (on a watch list by the FBI)

The Westboro Baptist Church is an American unaffiliated Baptist church known for its extreme ideologies, especially those against gay people. The church is widely described as a hate group and is monitored as such by the Anti-Defamation League and S... outhern Poverty Law Center. It was headed by Fred Phelps, and consists primarily of members of his extended family; in 2011, the church stated that it had about 40 members. The church is headquartered in a residential neighborhood on the west side of Topeka about three miles west of the Kansas State Capitol. Its first public service was held on the afternoon of November 27, 1955.The church has been involved in actions against gay people since at least 1991, when it sought a crackdown on homosexual activity at Gage Park six blocks northwest of the church. In addition to conducting anti-gay protests at military funerals, the organization pickets other celebrity funerals and public events. Protests have also been held against Jews and Catholics, and some protests have included WBC members stomping on the American flag   more
0 votes
0 comments
Westboro Baptist Church (on a watch list by the FBI) - Voter Comments
No Comments
Vote & Comment
Leave a comment...
(Maximum 900 words)

Unknown95 says2015-06-09T08:52:25.7562233-05:00
Report Post
But @banjos42 didn't you call liberals dangerous? Like the republicans they are just a type of political group, nothing more. Personally I think both parties/groups are full idiots who shouldn't be in government.