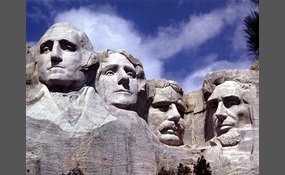 Most overrated US president

Which US president often praised by history books or the media do you think is overrated. (Can add your own answers)

Texas14 says2015-10-10T20:05:46.7249965Z
Report Post
Look, I like many Reagan policies, but the right looks at him as if he's a God. The reality is he was horrible on the drug war and loved the military industrial complex until he had to cut and run from Lebanon. He was a great president in many ways, but he wasn't perfect and we need to recognize that.
Vote & Comment
2
VOTING CLOSED

Abraham Lincoln was the 16th president of the United States, serving from March 1861 until his assassination in April 1865. Lincoln led the United States through its Civil War—its bloodiest war and its greatest moral, constitutional and political cr... isis. In doing so, he preserved the Union, abolished slavery, strengthened the federal government, and modernized the economy.Reared in a poor family on the western frontier, Lincoln was a self-educated lawyer in Illinois, a Whig Party leader, state legislator during the 1830s. Lincoln was elected to Congress in 1846, where he promoted rapid modernization of the economy through banks, tariffs, and railroads. He had originally agreed not to run for a second term and his opposition to the Mexican–American War was unpopular among the voters. He returned to Springfield and concentrated on his successful law practice throughout central Illinois. He returned to politics in 1854, and was a leader in building up the new Republican Party, which was had a statewide majority. After a series of highly publicized debates in 1858, during which Lincoln spoke out against the expansion of slavery, he lost the U.S   more
3 votes
1 comment
Abraham Lincoln - Voter Comments

Black-Jesus says2015-10-09T01:03:54.1928394Z
Report Post
Reagan is a close second. The only thing as good about him as a lot of Republicans purport to be is "Mr.Gorbachev, tear down this wall", which I'll admit is a pretty d*mn baller thing to say. However, Lincoln is widely respected as the president who preserved the union and banned slavery, but he didn't really want to ban slavery, he suspended many so-called unalienable rights like habeas corpus and others, and he didn't really preserve the union, or at least, not in a favorable way, as the South was left in ruins with a LOT of resentment that is still very prevalent to this day.
Vote & Comment
5
VOTING CLOSED

Franklin Delano Roosevelt, commonly known by his initials FDR, was an American statesman and political leader who served as the 32nd President of the United States. A Democrat, he was elected four times and served from March 1933 to his death in Apr... il 1945. He was a central figure in world events during the mid-20th century, leading the United States during a time of worldwide economic depression and total war. A dominant leader of the Democratic Party, he built a New Deal Coalition that realigned American politics after 1932, as his New Deal domestic policies defined American liberalism for the middle third of the 20th century.Roosevelt defeated incumbent Republican Herbert Hoover in November 1932, at the depth of the Great Depression. Energized by his personal victory over polio, FDR used his persistent optimism and activism to renew the national spirit. Assisted by key aide Harry Hopkins, he worked closely with British Prime Minister Winston Churchill and Soviet leader Joseph Stalin in leading the Allies against Nazi Germany, Fascist Italy and Imperial Japan in World War II   more
2 votes
0 comments
Franklin D. Roosevelt - Voter Comments
No Comments
Vote & Comment
6
VOTING CLOSED

Sir John Alexander Macdonald, GCB, KCMG, PC, PC, QC, was the first Prime Minister of Canada. The dominant figure of Canadian Confederation, he had a political career which spanned almost half a century. Macdonald served 19 years as Canadian Prime Mi... nister; only William Lyon Mackenzie King served longer.Macdonald was born in Scotland; when he was a boy his family immigrated to Kingston in the colony of Upper Canada. He articled with a local lawyer, who died before Macdonald qualified, and Macdonald opened his own practice, although not yet entitled to do so. He was involved in several high-profile cases and quickly became prominent in Kingston, which enabled him to seek and obtain a legislative seat in 1844. He served in the legislature of the colonial United Province of Canada and by 1857 had become premier under the colony's unstable political system.When in 1864 no party proved capable of governing for long, Macdonald agreed to a proposal from his political rival, George Brown, that the parties unite in a Great Coalition to seek federation and political reform   more
1 vote
0 comments
John A. Macdonald - Voter Comments
No Comments
Vote & Comment
Leave a comment...
(Maximum 900 words)

stainless67 says2015-10-11T22:08:41.5167655Z
Report Post
You know, I did really like ronald regan as a president and person. None the less he did do half bad in this nation in my opinion. AIDS, Crack, the economy. Oh by the way for those of you who dont know if you sell weapons to our enemies even though it is to fight communism. That is still treason. Side note to oliver north and randy cunningham. I get it you were both silver star winners in the air and on the ground in one of our most violent and socially contraversal wars. If you break the law, yes that makes you a criminal.