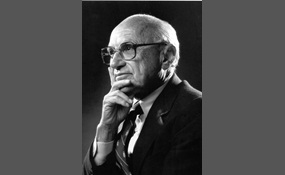 Which are your views closer to?

Neoliberalism is the resurgence of ideas associated with laissez-faire economic liberalism beginning in the 1970s and 1980s, whose advocates support extensive economic liberalization, free trade, and reductions in government spending in order to enh... ance the role of the private sector in the economy. The usage and definition of the term have changed over time.Originally neoliberalism was an economic philosophy that emerged among European liberal scholars in the 1930s attempting to trace a so-called ‘Third’ or ‘Middle Way’ between the conflicting philosophies of classical liberalism and collectivist central planning. The impetus for this development arose from a desire to avoid repeating the economic failures of the early 1930s which was mostly blamed on economic policy of classical liberalism. In the decades that followed, neoliberal theory tended to be at variance with the more laissez-faire doctrine of classical liberalism and promoted instead a market economy under the guidance and rules of a strong state, a model which came to be known as the social market economy.In the 1960s, usage of the term "neoliberal" heavily declined   more
6 votes
0 comments
Neoliberalism - Voter Comments
No Comments
Vote & Comment
2

Communism is a socioeconomic system structured upon common ownership of the means of production and characterized by the absence of social classes, money, and the state; as well as a social, political and economic ideology and movement that aims to ... establish this social order. The movement to develop communism, in its Marxist–Leninist interpretations, significantly influenced the history of the 20th century, which saw intense rivalry between the states which claimed to follow this ideology and their enemies.Communism is most associated with Marxism, which considers itself the embodiment of scientific socialism. According to Marxism, capitalism is a historically necessary stage of society, which has led to the concentration of social classes into two major groups: proletariat - who must work to survive, and who make up a majority of society - and bourgeoisie - a minority who derive profit from employing the proletariat, through private ownership of the means of production. The political, social, and economic conflict between both groups, each attempting to push their interests to their logical extreme, will lead into the capture of political power by the proletariat   more
2 votes
0 comments
Communism - Voter Comments
No Comments
Vote & Comment
3

Keynesian economics is the view that in the short run, especially during recessions, economic output is strongly influenced by aggregate demand. In the Keynesian view, aggregate demand does not necessarily equal the productive capacity of the econom... y; instead, it is influenced by a host of factors and sometimes behaves erratically, affecting production, employment, and inflation.The theories forming the basis of Keynesian economics were first presented by the British economist John Maynard Keynes in his book, The General Theory of Employment, Interest and Money, published in 1936, during the Great Depression. Keynes contrasted his approach to the aggregate supply-focused 'classical' economics that preceded his book. The interpretations of Keynes that followed are contentious and several schools of economic thought claim his legacy.Keynesian economists often argue that private sector decisions sometimes lead to inefficient macroeconomic outcomes which require active policy responses by the public sector, in particular, monetary policy actions by the central bank and fiscal policy actions by the government, in order to stabilize output over the business cycle   more
2 votes
1 comment
Keynesian economics - Voter Comments