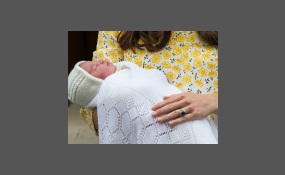 England has a new princess but we are guessing her name!

Florence Camm was an English stained glass designer, painter and decorative metalworker.Camm was the daughter of T. W. Camm, who had established his own firm of stained glass designers in Smethwick in 1865. She studied intermittently at the Birmingh... am School of Art between 1892 and 1912, where she was a pupil under Henry Payne. She exhibited 43 times at the Royal Academy.Examples of Camm's work such as the enamel casket she designed in the late 1890s for Birmingham Post editor John Thackray Bunce are masterpieces of national importance. She produced most of the artwork for her father's company after his death in 1912   more
2 votes
0 comments
Royal Pain - Voter Comments
No Comments
Vote & Comment
2