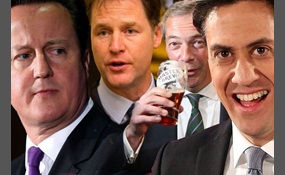 Out of the following British parties, which one would you choose for the General Elections?

The UK Independence Party, commonly known as UKIP, is a right wing political party in the United Kingdom. It was founded in 1993 by members of the Anti-Federalist League with the primary objective of securing the United Kingdom's withdrawal from the...  European Union. The party describes itself as a "patriotic" and "democratic, libertarian party" and is widely regarded as Eurosceptic and right-wing populist.The party is led by Nigel Farage, with deputy leader Paul Nuttall. UKIP has two Members of Parliament, three representatives in the House of Lords and twenty-four Members of the European Parliament, making it the largest UK party in the European Parliament. In October 2014, UKIP reported a membership of over 40,000.The party made its first significant breakthroughs in the 2013 local elections, when it came fourth in the number of council seats won and third in nationwide vote share, and in the 2014 European elections when UKIP received the most votes, the first time for over a century that a party other than Labour or the Conservatives has won a United Kingdom wide election   more
2 votes
1 comment
UK Independence Party - Voter Comments

The Labour Party is a centre-left political party in the United Kingdom. It grew out of the trade union movement and socialist political parties of the nineteenth century and has been described as a broad church; the party contains a diversity of id... eological trends from strongly socialist, to more moderately social democratic.Founded in 1900, the Labour Party overtook the Liberal Party in general elections during the early 1920s and formed minority governments under Ramsay MacDonald in 1924 and 1929–31. The party was in a wartime coalition from 1940 to 1945, after which it formed a majority government under Clement Attlee. Labour was also in government from 1964 to 1970 under Harold Wilson and from 1974 to 1979, first under Wilson and then James Callaghan.The Labour Party was last in national government between 1997 and 2010 under Tony Blair and Gordon Brown, beginning with a landslide majority of 179, reduced to 167 in 2001 and 66 in 2005. Having won 258 seats in the 2010 general election, the party currently forms the Official Opposition in the Parliament of the United Kingdom   more
1 vote
0 comments
Labour Party - Voter Comments
No Comments
Vote & Comment
4

The British National Party is a far-right political party in the United Kingdom. The party was formed by John Tyndall in 1982 from the merging of several political parties, and from 1999 to 2014 was led by Nick Griffin. It advocates "voluntary reset... tlement whereby immigrants and their descendants are afforded the opportunity to return to their lands of ethnic origin." In July 2014, Griffin stepped down as chairman and was replaced with an acting chairman, Adam Walker, a BNP activist from Spennymoor, England, and a former teacher who was banned from the profession for life.As well as anti-immigration policies, the party advocates the reintroduction of capital punishment and opposes same-sex marriage, multiculturalism and what it perceives as the Islamification of the UK.The party's ideology has been described as fascist or neo-fascist by political scientists and commentators, though the party denies this. High-profile groups and people including The Royal British Legion and David Cameron have criticised the BNP, and BNP membership is prohibited for people of certain occupations   more
0 votes
0 comments
British National Party - Voter Comments
No Comments
Vote & Comment
7

The Liberal Democrats, formerly The Social and Liberal Democrats and The Democrats, are a social-liberal political party in the United Kingdom. Its leader Nick Clegg claims the party is of the radical centre, though its membership is on the centre l... eft. It is the third-largest party in the UK in both number of seats in the House of Commons and number of councillors.The party was formed in 1988 by a merger of the Liberal Party and the Social Democratic Party. The two parties had formed the electoral SDP–Liberal Alliance for seven years prior. The Liberals had been in existence for 129 years and in power under leaders such as Gladstone, Asquith and Lloyd George. During these times in government, the Liberals are credited with the Liberal Reforms, which saw the creation of the welfare state. In the 1920s, the Labour Party replaced the Liberals as the largest opponent of the Conservative Party.Nick Clegg was elected leader in 2007. At the 2010 general election, the Liberal Democrats won 57 seats with 23% of the vote, making them the third-largest party in the House of Commons behind the Conservatives with 307 and Labour with 258   more
0 votes
0 comments
Liberal Democrats - Voter Comments
No Comments
Vote & Comment
8

The Scottish National Party is a Scottish nationalist and social-democratic political party in Scotland. The SNP supports and campaigns for Scottish independence. It is the third largest political party by membership in the United Kingdom, behind th... e Conservative Party and the Labour Party.The SNP was founded in 1934, with the merger of the National Party of Scotland and the Scottish Party. The party has had continuous parliamentary representation since Winnie Ewing won the 1967 Hamilton by-election.As of 2014, the SNP is the largest political party in Scotland in terms of membership, MSPs and local councillors, with over 92,000 members, 65 MSPs and 424 councillors, comprising in total 1.6% of the Scottish gross population. The SNP also currently holds 6 of 59 Scottish seats in the House of Commons of the United Kingdom. The party has 2 MEPs in the European Parliament, who sit in The Greens/European Free Alliance group. The SNP is a member of the European Free Alliance.With the creation of the Scottish Parliament in 1999, the SNP became the second largest party, serving two terms as the opposition   more
0 votes
0 comments
Scottish National Party - Voter Comments
No Comments
Vote & Comment
Leave a comment...
(Maximum 900 words)

Heraclitus says2015-04-08T13:17:03.1131791-05:00
Report Post
British national party? What are some Nazi? And UKIP is not BNP! BNP are Fascists and UKIP will save us from the fascists in the EU and the fascists in our own country (BNP). Why would you even think of getting one of the greatest parties of all time mixed up with some racist nazis?