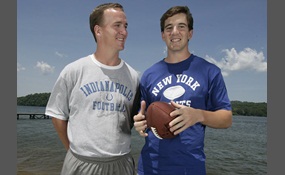 Who is the better Quarterback? Not Giants or Broncos, just who is a better quarterback.

Peyton Manning has one the Superbowl once, but is he a better player than his brother?
7 votes
3 comments
Peyton Manning - Voter Comments

boneman1 says2015-06-26T08:26:32.7957706-05:00
Report Post
This is a no brainer. Eli Manning is a good quarterback. Peyton Manning is one of the best, if not the best to ever play the position. Trying to justify picking Eli based on Super Bowls doesn't fly. Using that logic Trent Dilfer is a better quarterback than Dan Marino.
Vote & Comment
2

Eli Manning has won the Superbowl twice, but does that make him better than his brother?
2 votes
0 comments
Eli Manning - Voter Comments
No Comments
Vote & Comment
No comments yet.
Leave a comment...
(Maximum 900 words)
Privacy Policy | Terms of Use
Sitemap | View Desktop Version
©2020 Debate.org. All rights reserved.