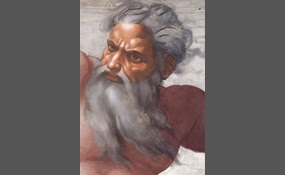 Pick your stance on the Existence of God.

Theism, in the broadest sense, is the belief that at least one deity exists. In a more specific sense, theism is commonly a monotheistic doctrine concerning the nature of a deity, and that deity's relationship to the universe. Theism, in this specif... ic sense, conceives of God as personal, present and active in the governance and organization of the world and the universe. As such theism describes the classical conception of God that is found in Christianity, Judaism, Islam, Sikhism and some forms of Hinduism. The use of the word theism to indicate this classical form of monotheism began during the scientific revolution of the seventeenth century in order to distinguish it from the then-emerging deism which contended that God, though transcendent and supreme, did not intervene in the natural world and could be known rationally but not via revelation.The term theism derives from the Greek theos meaning "god". The term theism was first used by Ralph Cudworth. In Cudworth's definition, they are "strictly and properly called Theists, who affirm, that a perfectly conscious understanding being, or mind, existing of itself from eternity, was the cause of all other things". Atheism is rejection of theism in the broadest sense of theism; i.E. The rejection of belief that there is even one deity   more
14 votes
1 comment
Theist - Voter Comments

Atheism is, in a broad sense, the rejection of belief in the existence of deities. In a narrower sense, atheism is specifically the position that there are no deities. Most inclusively, atheism is simply the absence of belief that any deities exist....  Atheism is contrasted with theism, which in its most general form is the belief that at least one deity exists.The term atheism originated from the Greek ἄθεος, meaning "without god", used as a pejorative term applied to those thought to reject the gods worshipped by the larger society. With the spread of freethought, skeptical inquiry, and subsequent increase in criticism of religion, application of the term narrowed in scope. The first individuals to identify themselves using the word "atheist" lived in the 18th century.Arguments for atheism range from the philosophical to social and historical approaches. Rationales for not believing in any supernatural deity include the lack of empirical evidence, the problem of evil, the argument from inconsistent revelations, and the argument from nonbelief. Although some atheists have adopted secular philosophies, there is no one ideology or set of behaviors to which all atheists adhere. Many atheists hold that atheism is a more parsimonious worldview than theism, and therefore the burden of proof lies not on the atheist to disprove the existence of God, but on the theist to provide a rationale for theism   more
13 votes
1 comment
Atheist - Voter Comments

NathanOuedraogo says2015-09-23T13:52:12.3848980Z
Report Post
I’m not a Theist, nor am I an atheist. I’m not religious nor am I spiritual, but I just do not know who exists. I need proof, and if I HAVE that proof, then I would follow a religion or I would be a theist. I just don't know what I am, but I do believe that theism is not atheism. But I do accept that I don't know. I feel like I just don’t know. So I have to pick the stance that god does not exists, just because we have no proof. We have nothing. Humans always want to understand and figure out why we exist, why the universe happened, and why life happened. So, what do we do? We come up with something to make us feel good. Human begins always want to understand everything. So we create this idea to make us feel safe. Make us have a purpose, because what is life unless we have a purpose, right? Why live? Why have morals? But one thing we have to keep into consideration is the fact that religions come in and fade out. Let’s take Ancient Greek religion for example. The Greeks were invested in this religion, and latter the Romans modeled their own religion on the Greek religion. But Ancient Roman religion started to fade out towards the decline of the Roman Empire, as they started to adopt Christianity. But the point that I’m getting at is that the Ancient Greeks and Romans were totally invested in their religion and they believed in it. But now, we believe that those religions are bogus, and Christianity is the world’s largest religion. But how can we say that Christianity is real when a thousand years ago no one believed in it? This can be said for ANY religion, so this is my main point here. How can we say that a religion, and thus the deity(s) that accompanies the religion, is real when religion is just a fad?
Vote & Comment
4

Deism is the belief that reason and observation of the natural world are sufficient to determine the existence of God, accompanied with the rejection of revelation and authority as a source of religious knowledge. Deism gained prominence in the 17th...  and 18th centuries during the Age of Enlightenment—especially in Britain, France, Germany, and in the United States—among intellectuals raised as Christians who believed in one god, but found fault with organized religion and did not believe in supernatural events such as miracles, the inerrancy of scriptures, or the Trinity.Deism is derived from deus, the Latin word for god. The earliest known usage in print of the English term deist is 1621, and deism is first found in a 1675 dictionary. Deistic ideas influenced several leaders of the American and French Revolutions. Two main forms of deism currently exist: classical deism and modern deism   more
2 votes
0 comments
Deist - Voter Comments
No Comments
Vote & Comment
5

Agnosticism is the view that the truth values of certain claims—especially claims about the existence or non-existence of any deity, as well as other religious and metaphysical claims—are unknown. Agnosticism can be defined in various ways, and is s... ometimes used to indicate doubt or a skeptical approach to questions. In some senses, agnosticism is a stance about the difference between belief and knowledge, rather than about any specific claim or belief. In the popular sense, an agnostic is someone who neither believes nor disbelieves in the existence of a deity or deities, whereas a theist and an atheist believe and disbelieve, respectively. Philosopher William L. Rowe states that in the strict sense, however, agnosticism is the view that humanity does not currently possess the requisite knowledge and/or reason to provide sufficient rational grounds to justify the belief that deities either do or do not exist.Thomas Henry Huxley, an English biologist, coined the word agnostic in 1869. However, earlier thinkers and written works have promoted agnostic points of view. They include Sanjaya Belatthaputta, a 5th-century BCE Indian philosopher who expressed agnosticism about any afterlife, Protagoras, a 5th-century BCE Greek philosopher who was agnostic about the gods, and the Nasadiya Sukta in the Rig Veda which is agnostic about the origin of the universe   more
1 vote
0 comments
Agnostic - Voter Comments
No Comments
Vote & Comment
6

Pantheism is the belief that everything composes an all-encompassing, immanent God, or that the universe is identical with divinity. Pantheists thus do not believe in a personal or anthropomorphic god.Pantheism was popularized in the modern era as b... oth a theology and philosophy based on the work of the 17th-century philosopher Baruch Spinoza, whose Ethics was an answer to Descartes' famous dualist theory that the body and spirit are separate. Spinoza held the monist view that the two are the same, and monism is a fundamental part of his philosophy. He was described as a "God-intoxicated man," and used the word God to describe the unity of all substance. Although the term pantheism was not coined until after his death, Spinoza is regarded as its most celebrated advocate   more
1 vote
1 comment
Pantheist - Voter Comments

Agnostic theism is the philosophical view that encompasses both theism and agnosticism. An agnostic theist believes in the existence of at least one deity, but regards the basis of this proposition as unknown or inherently unknowable. The agnostic t... heist may also or alternatively be agnostic regarding the properties of the god they believe in   more
0 votes
0 comments
Agnostic theist - Voter Comments
No Comments
Vote & Comment
8

Ignosticism or igtheism is the theological position that every other theological position assumes too much about the concept of God and many other theological concepts; including afterlife, damnation, salvation, sin and the soul.Ignosticism is the v... iew that a coherent definition of a given religious term or theological concept must be presented before the question of the existence or nature of said term can be meaningfully discussed. Furthermore, if that definition is unfalsifiable, the ignostic takes the theological noncognitivist position that the question of the existence or nature referred to by the term, for the given definition, is meaningless.Some philosophers have seen ignosticism as a variation of agnosticism or atheism, while others have considered it to be distinct.The term ignosticism was coined in the 1960s by Sherwin Wine, a rabbi and a founding figure of Humanistic Judaism. The term igtheism was coined by the secular humanist Paul Kurtz in his 1992 book The New Skepticism   more
0 votes
0 comments
Ignostic - Voter Comments
No Comments
Vote & Comment
Leave a comment...
(Maximum 900 words)