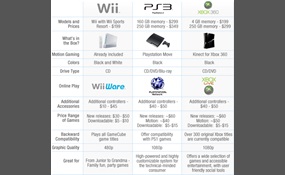 Playstation 4 vs Xbox One

The PlayStation 4 is a home video game console from Sony Computer Entertainment. Announced as the successor to the PlayStation 3 during a press conference on 20 February 2013, it was launched on 15 November 2013 in North America, and 29 November 201... 3 in Europe and Australia. It competes with Nintendo's Wii U and Microsoft's Xbox One, as one of the eighth generation of video game consoles.Moving away from the more complex Cell architecture of its predecessor, the PlayStation 4 features an AMD x86-64 Accelerated Processing Unit, in hopes of attracting a broader range of developers and support for the system. The PlayStation 4's GPU can perform 1.843 teraflops. Sony calls the PlayStation 4 "the world's most powerful console" and, speaking to Edge magazine, numerous game developers described the performance difference between the PS4 and Xbox One as "'significant' and 'obvious'".The makers of PlayStation 4 intend to focus more on social gameplay over time, and incorporated a "share" button on the new controller and enabled a view of in-game play streamed live from friends   more
36 votes
6 comments
PlayStation 4 - Voter Comments

sk8tergirl10 says2016-03-07T16:07:13.6381139Z
Report Post
Breh is this even a question i mean there's freaking hulu, Netflix, YouTube and more. As for games there's Mortal Combat X, marvel vs Cap-com Infinity Gods among us, Minecraft, Grand theft Auto, NBA 2k 16 and there's so many other games you can play. The only problem is there is no Assassins creed and a lot of other fudging games.

Shadic35 says2016-03-09T16:42:07.9564609Z
Report Post
While I do admit the Xbox is a great console, I believe that the PS4 is superior due to some elements that the XBOX doesn't have. First off, the controller. While I do think that the Xbox controllers are great for gaming, the PS4 controllers are the way to go. I personally love Dualshock controllers and I think that the new touch pads on the controllers work well with certain game elements, such as in Tearaway when you use the pad to control the wind to keep Iota from falling. Many people think the Xbox was created before the original PlayStation. It wasn't. The original PlayStation was released on December 3rd, 1994, and the Xbox was released on November 15, 2001. While the Xbox does have some fantastic games such as Gears of War and Halo, the PS4 has some amazing releases too, such as the Ratchet and Clank reboot and Tearaway.

Xbox One is a home video game console developed and marketed by Microsoft. Announced on May 21, 2013, it is the successor to the Xbox 360 and is the third console in the Xbox family. It directly competes with Sony's PlayStation 4 and Nintendo's Wii ... U as part of the eighth generation of video game consoles. Xbox One was released across North America, several European markets, Australia, and New Zealand on November 22, 2013, and later in 26 other markets, including Japan, the remaining European markets, and the Middle East, in September 2014. It is also the first Xbox game console to be released in China, specifically in the Shanghai Free-Trade Zone. Microsoft and various publications have classified the device as an "all-in-one entertainment system", making it a competitor to other digital media players such as the Apple TV and the Google TV platforms.Moving away from the Xbox 360's PowerPC-based architecture and back into the x86 architecture used in the first Xbox, the console features an AMD processor built around the x86-64 instruction set   more
25 votes
6 comments
Xbox One - Voter Comments

The Wii U is a home video game console from Nintendo and the successor to the Wii. The system was released on these dates: November 18, 2012, in North America; November 30, 2012, in the PAL regions; and on December 8, 2012, in Japan. As the first en... try in the eighth generation of video game home consoles, it directly competes with Sony's PlayStation 4 and Microsoft's Xbox One.The Wii U is the first Nintendo console to support high-definition graphics. The Wii U's primary controller is the Wii U GamePad, which features an embedded touchscreen. Each software title may be designed to utilize this touchscreen as being supplemental to the main TV, or as the only screen for Off-TV Play. Each game may support any combination of the GamePad, the Wii Remote, the Wii Nunchuk, the Wii Balance Board, or Nintendo's more classically shaped Wii U Pro Controller.The system is backward compatible with Wii software; this mode also utilizes Wii-based controllers, and it optionally offers the GamePad as its primary Wii display and motion sensor bar   more
7 votes
0 comments
Wii U - Voter Comments
No Comments
Vote & Comment
Leave a comment...
(Maximum 900 words)

LemonDebates says2016-05-29T03:16:50.8072362Z
Report Post
PC of course, consoles are stupidly overpriced with their hidden fees and outdated graphics. If I had to pick a console it would surely be the Wii U as it has the best exclusives out of them all. You can build a PC for console price that beats the Xbox one and the PS4 in graphics and frame rate. As well as money saved from the fascinating steam sales and not having to pay for a service you already have (Playing online)