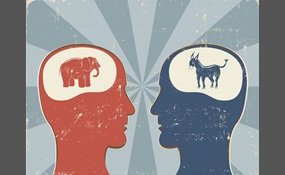 What party is more for the middle class

The Republican Party, commonly referred to as the GOP, is one of the two major contemporary political parties in the United States, the other being its historic rival the Democratic Party. Founded by anti-slavery activists in 1854, the GOP dominated...  politics nationally and in most of the North for most of the period from 1860 to 1932. There have been 18 Republican presidents, the first being Abraham Lincoln, who served from 1861 until his assassination in 1865, and the most recent being George W. Bush, who served two full four-year terms 2001 to 2009. The most recent Republican presidential nominee was former Massachusetts governor Mitt Romney who lost in 2012.The party's platform is generally based upon American conservatism, in contrast to the contemporary American liberalism of the rival Democratic Party. The Republican Party's conservatism involves supporting free market capitalism, opposing regulation and labor unions, and supporting socially conservative policies. The party is generally split on the issue of how to deal with illegal immigration   more
10 votes
0 comments
Republican Party - Voter Comments
No Comments
Vote & Comment
2

The Democratic Party is one of the two major contemporary political parties in the United States, along with the younger Republican Party. Tracing its origins back to the Democratic-Republican Party, the modern Democratic Party was founded around 18... 28. There have been 15 Democratic presidents, the first being Andrew Jackson, who served from 1829 to 1837; the most recent is the current president, Barack Obama, who has served since 2009.Since the 1930s, the party has promoted a social-liberal platform, supporting a mixed economy and social justice. The party's philosophy of contemporary American liberalism advocates civil and political rights and liberties along with social justice. It pursues a mixed economy by providing government intervention and regulation in the economy. These interventions, such as universal health care, labor protection, social programs, equal opportunity, consumer protection, and environmental protection, form the party's economic policy basis. Until the late 20th century the party had a powerful conservative and populist wing based in the rural South, which over time has greatly diminished   more
4 votes
0 comments
Democratic Party - Voter Comments
No Comments
Vote & Comment
4

The New Democratic Party is a major social democratic federal political party in Canada. The current leader of the NDP is Thomas Mulcair, who was elected in the 2012 leadership election.The NDP was founded in 1961 out of the merger of the Co-operati... ve Commonwealth Federation with the Canadian Labour Congress.The provincial wing of the NDP in Manitoba currently forms the government in that province. Provincial parties have previously formed governments in British Columbia, Nova Scotia, Ontario, and Saskatchewan, and the territorial party formed the government in Yukon from 1985–1992 and 1996–2000.In the 2011 federal election under the leadership of Jack Layton, the NDP won the second-most seats in the Canadian House of Commons, gaining the title of Official Opposition for the first time in Canadian history   more
1 vote
0 comments
New Democratic Party - Voter Comments
No Comments
Vote & Comment
6

The American Nazi Party was an American political party founded by George Lincoln Rockwell. Headquartered in Arlington, Virginia, Rockwell initially called it the World Union of Free Enterprise National Socialists, but later renamed it the American ... Nazi Party in 1960 to attract maximum media attention. The party was based largely upon the ideals and policies of Adolf Hitler's NSDAP in Germany during the Third Reich but also expressed allegiance to the Constitutional principles of the U.S.'s Founding Fathers. It also espoused Holocaust denial   more
0 votes
0 comments
American Nazi Party - Voter Comments
No Comments
Vote & Comment
8

The American Independent Party is a far right political party of the United States that was established in 1967 by Bill Shearer and his wife, Eileen Shearer of California. It is most notable for its nomination of former Governor George Wallace of Al... abama, who carried five states in the 1968 presidential election running on a segregationist platform against Richard M. Nixon and Hubert H. Humphrey. The party split in 1976 into the modern American Independent Party and the American Party. From 1992 until 2008 the party was the California affiliate of the national Constitution Party, with its exit from the Constitution Party leading to a leadership dispute during the 2008 election   more
0 votes
0 comments
American Independent Party - Voter Comments
No Comments
Vote & Comment
Leave a comment...
(Maximum 900 words)

FreedomBeforeEquality says2015-07-10T10:49:16.2760356-05:00
Report Post
For now at least. Parties have been known to flip flop on their beliefs to stay in power. I imagine if libertarians actually made it into the white house more often, they would not act all that much different than the other two parties when reelection time came around.

FreedomBeforeEquality says2015-07-10T10:51:35.2496790-05:00
Report Post
I think thats why they seem so good really. They arent totally corrupted because they never win ... But what good does that do anyone? They push the envelope. Thats what theyve been most effective at really.