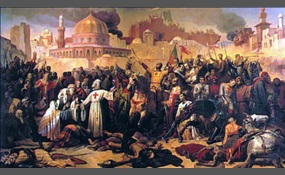 Primary motive behind the First Crusade?

I'm specifically talking about the First Crusade, not the other Crusades in general.

Political gain for the Pope

Pope Urban manipulated his position as a high religious authority as a means of regaining political influence over the newly stabilized Europe for the Catholic Church. It is easy to unity various divided groups when you give them a common enemy, and...  in this case, the Pope used the Seljuks as a scapegoat and as an excuse to regain political influence over a mostly feudal Europe   more
3 votes
2 comments
Political gain for the Pope - Voter Comments

58539672 says2015-05-30T00:31:53.4769748-05:00
Report Post
After the collapse of the Carolingian Empire (located in what is now France) an entire class of warriors and knights were now stateless with little to do. So they resorted to fighting amongst themselves, which eventually became a major problem for all of Europe. Then when the Byzantine Empire asked for help defending their boarders from Turkish invaders, the Pope at the time decided to both increase his influence on a largely Orthodox region and deal with his knight surplus at the same time. He called for an army to form to help the Byzantines and would later turn the entire endeavor into a reconquest of the Holy land. Worked out pretty well for Pope Urban II.
Vote & Comment
2

Pope Urban called for the Crusade for religious reasons, naming the Crusade a "pilgrimage" to the Holy Lands. Moreover, The Crusaders were motivated by the prospect of retaking Jerusalem for Christendom, hence establishing a series a of Christian ki... ngdoms along the Palestinian coastline. Therefore, the Crusades were mostly motivated by Religion and religious gain   more
1 vote
0 comments
Religion - Voter Comments
No Comments
Vote & Comment
3

Political gain for the Byzantines

Alexius Komnenos (The Byzantine Emperor at the time) implored the Pope as a means of regaining control over the Anatolian peninsula after the recent,, but devastating, incursions by the Seljuk Turks. It was then in this case that the Pope used this ... request as an excuse to go to the Council of Clermont and call for the Crusades. The Byzantines were pulling the strings for the first half of the Crusades   more
0 votes
0 comments
Political gain for the Byzantines - Voter Comments
No Comments
Vote & Comment
4

Purging this world of infidel filth, to prevent conflicts in the future.

The Clash of Civilizations is a theory that people's cultural and religious identities will be the primary source of conflict in the post-Cold War world. It was proposed by political scientist Samuel P. Huntington in a 1992 lecture[1] at the America... n Enterprise Institute, which was then developed in a 1993 Foreign Affairs article titled "The Clash of Civilizations?", in response to his former student Francis Fukuyama's 1992 book, The End of History and the Last Man. Huntington later expanded his thesis in a 1996 book The Clash of Civilizations and the Remaking of World Order. The phrase itself was earlier used by Bernard Lewis in an article in the September 1990 issue of The Atlantic Monthly titled "The Roots of Muslim Rage". Even earlier, the phrase appears in a 1926 book regarding the Middle East by Basil Mathews: Young Islam on Trek: A Study in the Clash of Civilizations (p. 196). This expression derives from clash of cultures, already used during the colonial period and the Belle Époque   more
0 votes
0 comments
Purging this world of infidel filth, to prevent conflicts in the future. - Voter Comments
No Comments
Vote & Comment
Leave a comment...
(Maximum 900 words)