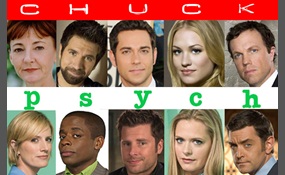 Which is best the show psych or chuck (pick psych) friend thinks chuck is :l chucks still good though.

Psych is an American detective comedy-drama television series created by Steve Franks and broadcast on USA Network with syndication reruns on ION Television. It is produced by Franks and Tagline Television's Chris Henze and Kelly Kulchak. The series...  stars James Roday as Shawn Spencer, a young crime consultant for the Santa Barbara Police Department whose "heightened observational skills" and impressive detective instincts allow him to convince people that he solves cases with psychic abilities. The program also stars Dulé Hill as Shawn's best friend and reluctant partner Burton "Gus" Guster, as well as Corbin Bernsen as Shawn's father, Henry, a former officer of the Santa Barbara Police Department.During the second season, an animated segment was added to the series titled "The Big Adventures of Little Shawn and Gus". Psych debuted on Friday, July 7, 2006, immediately following the fifth season premiere of Monk, and continued to be paired with the series until Monk's conclusion on December 4, 2009. It was the highest-rated U.S. basic cable television premiere of 2006   more
6 votes
2 comments
Psych - Voter Comments