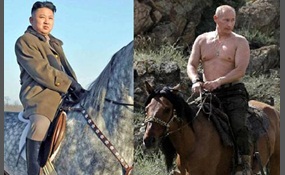 Vladimir Vladimirovich Putin has been the President of Russia since 7 May 2012. Putin previously served as President from 2000 to 2008, and as Prime Minister of Russia from 1999 to 2000 and again from 2008 to 2012. During his last term as Prime Mini... ster, he was also the Chairman of United Russia, the ruling party.For 16 years Putin was an officer in the KGB, rising to the rank of Lieutenant Colonel before he retired to enter politics in his native Saint Petersburg in 1991. He moved to Moscow in 1996 and joined President Boris Yeltsin's administration where he rose quickly, becoming Acting President on 31 December 1999 when Yeltsin unexpectedly resigned. Putin won the subsequent 2000 presidential election and was reelected in 2004. Because of constitutionally mandated term limits, Putin was ineligible to run for a third consecutive presidential term in 2008. Dmitry Medvedev won the 2008 presidential election and appointed Putin as Prime Minister, beginning a period of so-called "tandemocracy"   more
12 votes
2 comments
Vladimir Putin - Voter Comments

Kim Jong-un is the supreme leader of the Democratic People's Republic of Korea. He is the son of Kim Jong-il and the grandson of Kim Il-sung. He has held the titles of the First Secretary of the Workers' Party of Korea, the Chairman of the Central M... ilitary Commission, First Chairman of the National Defence Commission of North Korea, the Supreme Commander of the Korean People's Army, and presidium member of the Politburo of the Workers' Party of Korea. He was officially declared the supreme leader following the state funeral for his father on 28 December 2011. He is the third and youngest son of Kim Jong-il and his consort Ko Young-hee.From late 2010, Kim Jong-un was viewed as heir apparent to the leadership of the nation, and following his father's death, he was announced as the "Great Successor" by North Korean state television. At Kim Jong-il's memorial service, North Korean Chairman of the Supreme People's Assembly Kim Yong-nam declared that "Respected Comrade Kim Jong-un is our party, military and country's supreme leader who inherits great comrade Kim Jong-il's ideology, leadership, character, virtues, grit and courage"   more
4 votes
2 comments
Kim Jong-un - Voter Comments