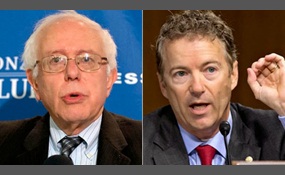 Randal Howard "Rand" Paul is the junior United States Senator for Kentucky. He is a member of the Republican Party and the son of former U.S. Representative and presidential candidate Ron Paul of Texas. He first received national attention in 2008 w... hen making political speeches on behalf of his father, who was campaigning for the Republican Party's nomination for president. During his father's final term in the house, he was the first United States senator to have served simultaneously with a parent in the United States House of Representatives. A graduate of the Duke University School of Medicine, Paul began practicing ophthalmology in Bowling Green, Kentucky in 1993 and established his own clinic in December 2007. He remained active in politics and founded Kentucky Taxpayers United in 1994, of which he is still chairman. In 2010, Paul ran as the Republican candidate for the United States Senate seat being vacated by retiring Senator Jim Bunning of Kentucky, defeating Kentucky Secretary of State Trey Grayson in the primary. He subsequently defeated Kentucky Attorney General Jack Conway in the general election   more
6 votes
2 comments
Rand Paul - Voter Comments

Bernard "Bernie" Sanders is an American politician and the junior United States Senator from Vermont. Before serving in the Senate, he represented Vermont's at-large district in the United States House of Representatives and served as mayor of Burli... ngton, the largest city in Vermont. Sanders is a self-described democratic socialist, and has praised Scandinavian-style social democracy.Sanders caucuses with the Democratic Party and is counted as a Democrat for the purposes of committee assignments, but because he does not belong to a formal political party, he appears as an independent on the ballot. He was also the only independent member of the House during most of his service and is the longest-serving independent in U.S. Congressional history.In an interview with The Nation on March 6, 2014, Sanders stated that he is "prepared to run for President of the United States" in 2016   more
2 votes
2 comments
Bernie Sanders - Voter Comments

discomfiting says2014-07-09T12:06:51.6470655-05:00
Report Post
Bernie Sanders is a million times better than Paul. The biggest misconception people have about bernie sanders is socialism; just like capitalism, there are types of socialism. The type of socialism that he supports is social democracy which was proven to work a million times better than what he have and had. Use socialist reforms to restore capitalism and escape the mass inequality that was created through decades of crony capitalist policies.
Vote & Comment
Leave a comment...
(Maximum 900 words)