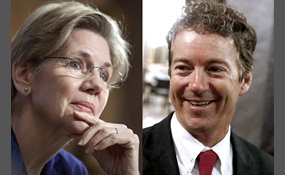 Rand Paul or Elizabeth Warren in 2016?

Randal Howard "Rand" Paul is the junior United States Senator for Kentucky. He is a member of the Republican Party and the son of former U.S. Representative and presidential candidate Ron Paul of Texas. He first received national attention in 2008 w... hen making political speeches on behalf of his father, who was campaigning for the Republican Party's nomination for president. During his father's final term in the house, he was the first United States senator to have served simultaneously with a parent in the United States House of Representatives.A graduate of the Duke University School of Medicine, Paul began practicing ophthalmology in Bowling Green, Kentucky in 1993 and established his own clinic in December 2007. He remained active in politics and founded Kentucky Taxpayers United in 1994, of which he is still chairman.In 2010, Paul ran as the Republican candidate for the United States Senate seat being vacated by retiring Senator Jim Bunning of Kentucky, defeating Kentucky Secretary of State Trey Grayson in the primary. He subsequently defeated Kentucky Attorney General Jack Conway in the general election. A member of the Tea Party movement, he supports term limits, a balanced budget amendment, the Read the Bills Act, and widespread reduction in federal spending and taxation. Unlike his more stridently isolationist, or "non-interventionist", father, Paul concedes a role for American armed forces abroad, including permanent foreign military bases. He has garnered attention for his positions, often clashing with both Republicans and Democrats   more
8 votes
1 comment
Rand Paul - Voter Comments

Elizabeth Ann Warren is an American academic and politician, who is the senior United States Senator from Massachusetts and a member of the Democratic Party. She was previously a Harvard Law School professor specializing in bankruptcy law. Warren is...  an active consumer protection advocate whose work led to the conception and establishment of the U.S. Consumer Financial Protection Bureau. She has written a number of academic and popular works, and is a frequent subject of media interviews regarding the American economy and personal finance.In the wake of the 2008 financial crisis, Warren served as chair of the Congressional Oversight Panel created to oversee the Troubled Asset Relief Program. She later served as Assistant to the President and Special Advisor to the Secretary of the Treasury for the Consumer Financial Protection Bureau under President Barack Obama. In the late 2000s, she was recognized by publications such as the National Law Journal and the Time 100 as an increasingly influential public policy figure.In September 2011, Warren announced her candidacy for the U.S. Senate, challenging Republican incumbent Scott Brown. She won the general election on November 6, 2012, to become the first female Senator from Massachusetts. She was assigned to the Senate Special Committee on Aging; the Banking, Housing, and Urban Affairs Committee; and the Health, Education, Labor, and Pensions Committee   more
7 votes
4 comments
Elizabeth Warren - Voter Comments

guntherstauffenberg says2014-05-04T13:07:52.6688989-05:00
Report Post
She may have said she would not run in reality, but this is a "what if" situation, so yes I would vote for her a million times with my new ID, chip, birth certificate, blood sample, hair sample, three letters of reference, tattoo from my party affiliate, my full body scan, and driver's license. How's that for voter fraud dingus?