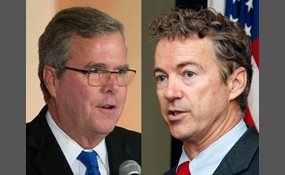 Randal Howard "Rand" Paul is an American politician and a former ophthalmologist who serves as the junior United States Senator for Kentucky, in office since 2011. He is a member of the Republican Party and the son of former U.S. Representative and ... presidential candidate Ron Paul of Texas.A graduate of the Duke University School of Medicine, Paul began practicing ophthalmology in Bowling Green, Kentucky in 1993 and established his own clinic in December 2007. He became active in politics and founded Kentucky Taxpayers United in 1994, of which he is still chairman. He first received national attention in 2008 when making political speeches on behalf of his father, who was campaigning for the Republican Party's nomination for president. In 2010, Paul ran for the U.S. Senate seat being vacated by retiring Senator Jim Bunning of Kentucky, defeating Kentucky Secretary of State Trey Grayson in the Republican primary. He subsequently defeated the Democratic nominee, Kentucky Attorney General Jack Conway, in the general election   more
14 votes
6 comments
Rand Paul - Voter Comments

John Ellis "Jeb" Bush served as the 43rd Governor of Florida from 1999 to 2007. He is the second son of former President George H. W. Bush and former First Lady Barbara Bush, and is the younger brother of former President George W. Bush. Jeb Bush is...  the only Republican to serve two full four-year terms as Governor of Florida.Bush grew up in Houston, Texas. He attended the University of Texas, where he earned a degree in Latin American affairs. Following his father's successful run for Vice President in 1980, he moved to Florida. In 1986, Bush was named Florida's Secretary of Commerce, a position he held until resigning in 1988 to help his father's successful campaign for the Presidency.In 1994, Bush made his first run for office, narrowly losing the election for governor by less than two percentage points to the incumbent Lawton Chiles. Bush ran again in 1998 and beat Lieutenant Governor Buddy MacKay with 55 percent of the vote. He ran for reelection in 2002, and won with 56 percent, to become Florida's first two-term Republican Governor   more
1 vote
0 comments
Jeb Bush - Voter Comments
No Comments
Vote & Comment
No comments yet.
Leave a comment...
(Maximum 900 words)
Privacy Policy | Terms of Use
Sitemap | View Desktop Version
©2020 Debate.org. All rights reserved.