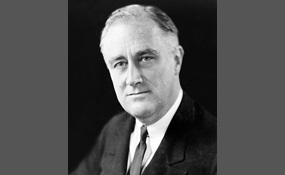 Roosevelt's idea of a second Bill of Rights.

In 1944, Franklin Delano Roosevelt thought the United States government was in need of a bit of an overhaul. He knew few who served alongside him would support his new vision for the country, so he pitched his idea for a second bill of rights to the American public during his 1944 State of the Union address.Unlike the Bill of Rights, which ensured citizens’ freedom by limiting government action, FDR’s second bill of rights called for greater government action for social and economic stability. He called for