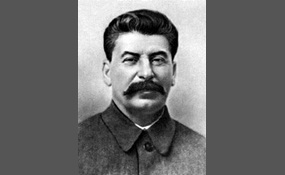 Russian "Staches": Who had the best one?

Joseph Stalin or Iosif Vissarionovich Stalin, was the leader of the Soviet Union from the mid-1920s until his death in 1953.Among the Bolshevik revolutionaries who took part in the Russian Revolution of 1917, Stalin was appointed general secretary o... f the party's Central Committee in 1922. He subsequently managed to consolidate power following the 1924 death of Vladimir Lenin through suppressing Lenin's criticisms and expanding the functions of his role, all the while eliminating any opposition. By the late 1920s, he was the unchallenged leader of the Soviet Union. He remained general secretary until the post was abolished in 1952, concurrently serving as the Premier of the Soviet Union from 1941 onward.Under Stalin's rule, the concept of "socialism in one country" became a central tenet of Soviet society. He replaced the New Economic Policy introduced by Lenin in the early 1920s with a highly centralised command economy, launching a period of industrialization and collectivization that resulted in the rapid transformation of the USSR from an agrarian society into an industrial power   more
6 votes
2 comments
Joseph Stalin - Voter Comments

Seido says2014-08-04T17:10:15.8700919-05:00
Report Post
I hate him with every fiber of my being, but damn does he has an awesome mustache. It is THE iconic mustache for Russia, the Soviet Union, and 1984. And of course it'd be the iconic mustache for fascism, genocide, and international atrocities too if it weren't for Hitler.

Nicholas II of Russia (Nikolai Aleksandrovich Romanov) (18 May[O.S. 6 May]1868 – 17 July[O.S. 4 July]1918) (Russian: Никола́й II, Nikolay II) was the last Emperor of Russia, King of Poland, and Grand Duke of Finland. He ruled from 1894 until his for... ced abdication in 1917. Nicholas proved unable to manage a country in political turmoil and command its army in World War I. His rule ended with the Russian Revolution of 1917, after which he and his family were shot by Bolsheviks. Nicholas's full name was Nikolay Aleksandrovich Romanov (Никола́й Алекса́ндрович Рома́нов). His official title was Nicholas II, Emperor and Autocrat of All the Russias. He is sometimes referred to as Nicholas the Martyr due to his execution and as Bloody Nicholas because of the tragic events during his coronation and his government's subsequent suppression of dissent. As a result of his canonization, he has been regarded as Saint Nicholas The Passion Bearer by the Russian OrthodoxNicholas was determined to uphold authority yet lacked assertiveness. He was Obstinate, ineffectual, easily influenced. He had genuine affection for the people but expected them to be blindly obedient. He was as a ‘little man lost in the immensity of his realm’ The Reign of Nicholas up to 1905  He has a bad start to his regime. In 1895 Members of the Tver Zemstvo requested opportunity to express opinions to the government; Nicholas rejected them as ‘senseless dreams’. The Celebrations at his coronation contained free beer stampede, 1300 dead. Nicholas II carried on celebrations by attending a French Ball, visiting hospitals next day. This did great damage as he was seen as uncaring, reinforced on Bloody Sunday (1905) Reform requests were rejected by Nicholas. University unrest grew, 1899 student protests suppressed and universities were closed. Many students joined the SRs who increased assassinations, e.g. Interior Minister (Plehve). Russification continued. The unrest in the Countryside grew as with land hunger plus SR propaganda. Towns’ unrest e.g. 1896 St. Petersburg strike, Led Zubatov (Moscow Okhrana chief) to set up a union to monitor unrest. However it failed as it became involved in General Strike in Odessa in 1903 and Zubatov was  dismissed. Father Gapon was allowed to set up ‘The Assembly of Russian Factory Workers’ to channel unrest however it Backfired and led to Bloody Sunday involvement. By 1900a Cross-section of society was discontented, Reformist / revolutionary ideas were spreading and Peasant uprisings, assassinations, strikes1906 – 14: The Dumas The October manifesto decreed that no law should come into force without the consent of the state Duma.Witte resigned just before the first duma to be replaced by Goremykin (conservative). Govt cabinet contained no progressives Duma (1): April to June 1906  Top parties = Labourists (SRs had boycotted), Kadets (REFORMIST)Liberals had high hopes – expected to be able to debate the big issuesNot offered by the govtTsarist regime recovering after 1905Early 1906 govt had a big loan from the French (no financial hold could be gained by the Duma)Fundamental Laws restrictiveBi-cameral duma – elected lower house plus State Council (appointed)Right of vetoOverall no intention of allowing the duma powerBitter mood, voiced anger, far from compliant – felt betrayedDissolved in atmosphere of violence200 deputies reassemble at Vyborg – ‘Appeal’ urging people to stop           paying taxes and disobey conscription. Reaction was scattered violence rather than passive resistance – arrested and debarred from future. No real defence of the duma…prelude to Stolypin repressionLong-term effects – Kadets never really recover from humiliation, liberals discredited, played into the hands of the extremes Duma (2): February to June 1907  Vyborg – Kadets lost half their seats (two leading Kadets assassinated during elections)Still no..   more
3 votes
0 comments
Nicholas II of Russia - Voter Comments
No Comments
Vote & Comment
3

Vladimir Ilyich Lenin was a Russian communist revolutionary, politician and political theorist. He served as the leader of the Russian Soviet Federative Socialist Republic from 1917, and then concurrently as Premier of the Soviet Union from 1922, un... til his death. Under his administration, the Russian Empire was dissolved and replaced by the Soviet Union, a one-party socialist state; industry and businesses were nationalized, with widespread societal reform implemented. Politically a Marxist, his theoretical contributions to Marxist thought are known as Leninism.Born to a wealthy middle-class family in Simbirsk, Lenin gained an interest in revolutionary leftist politics following the execution of his brother Aleksandr in 1887. Expelled from Kazan State University for participating in anti-Tsarist protests, he devoted the following years to a law degree and to radical politics, becoming a Marxist. In 1893 he moved to St Petersburg, and became a senior figure in the Russian Social Democratic Labour Party   more
1 vote
1 comment
Vladimir Lenin - Voter Comments

Ivan IV Vasilyevich, commonly known as Ivan the Terrible, was the Grand Prince of Moscow from 1533 to 1547 and Tsar of All the Russias from 1547 until his death. His long reign saw the conquest of the Khanates of Kazan, Astrakhan, and Siberia, trans... forming Russia into a multiethnic and multiconfessional state spanning almost one thousand million acres, approximately 4,046,856 km². Ivan managed countless changes in the progression from a medieval state to an empire and emerging regional power, and became the first ruler to be crowned as Tsar of All the Russians.Historic sources present disparate accounts of Ivan's complex personality: he was described as intelligent and devout, yet given to rages and prone to episodic outbreaks of mental illness. His mental illness increased in severity with his age, and the second period of his reign saw the deterioration of his mental state and consequently, his rule. In one such outburst, he killed his groomed and chosen heir Ivan Ivanovich. This left the Tsardom to be passed to Ivan's younger son, the weak and intellectually disabled Feodor Ivanovich   more
1 vote
1 comment
Ivan the Terrible - Voter Comments

Glory of motherland is indicated by glory of moustache!
0 votes
0 comments
Other Russian Leader - Voter Comments
No Comments
Vote & Comment
6

Leon Trotsky was a Russian Marxist revolutionary and theorist, Soviet politician, and the founder and first leader of the Red Army.Trotsky was initially a supporter of the Menshevik Internationalists faction of the Russian Social Democratic Labour P... arty. He joined the Bolsheviks immediately prior to the 1917 October Revolution, and eventually became a leader within the Party. During the early days of the Soviet Union, he served first as People's Commissar for Foreign Affairs and later as the founder and commander of the Red Army as People's Commissar of Military and Naval Affairs. He was a major figure in the Bolshevik victory in the Russian Civil War. He was also among the first members of the Politburo.After leading a failed struggle of the Left Opposition against the policies and rise of Joseph Stalin in the 1920s and the increasing role of bureaucracy in the Soviet Union, Trotsky was successively removed from power in 1927, expelled from the Communist Party, and finally deported from the Soviet Union in 1929. As the head of the Fourth International, Trotsky continued in exile in Mexico to oppose the Stalinist bureaucracy in the Soviet Union   more
0 votes
0 comments
Leon Trotsky - Voter Comments
No Comments
Vote & Comment
Leave a comment...
(Maximum 900 words)