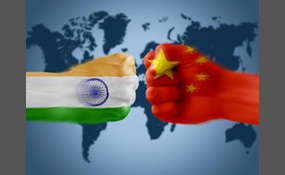 Should America Intervene in a Future War Between China and India?

No, it's none of our business.

13 votes
0 comments
No, it's none of our business. - Voter Comments
No Comments
Vote & Comment
2

No, America is tired of fighting wars.

No, America trades a lot with China, and we don't need to disturb that.

1 vote
0 comments
No, America trades a lot with China, and we don't need to disturb that. - Voter Comments
No Comments
Vote & Comment
4

Yes, a balance of power is needed against China.

Yes, China is an ally of Pakistan which is a rival of India, and Pakistan harbors Islamists who America opposes.

0 votes
0 comments
Yes, China is an ally of Pakistan which is a rival of India, and Pakistan harbors Islamists who America opposes. - Voter Comments
No Comments
Vote & Comment
6

Yes, America needs to contain China in the Pacific.

Yes, Israel is America's ally, and India is Israel's ally.

No, Russia is an ally of India, and Russia isn't America's ally.

wrichcirw says2015-05-01T12:26:02.0711532-05:00
Report Post
Assuming such a war would actually break out between nuclear powers, of course American should intervene...Hell the whole world would intervene.

wrichcirw says2015-05-01T22:03:36.2430195-05:00
Report Post
@daktoria - you're proposing war between nuclear powers. It's never happened before, and if a war were to break out between any two nuclear powers, there's every reason to think that nukes would be the first weapon of war used by both parties. If nukes aren't a deterrent for war, then nukes are what they are - weapons of war that were manufactured to be used.

Daktoria says2015-05-02T10:24:24.1642112-05:00
Report Post
Wrichcirw, you're ignoring how India and China don't compose the entire world. Both sides have third party relations to maintain. If either side used nukes, the rest of the world would hate them. We live in a multipolar world today. This isn't like the Cold War between the U.S. and the Soviet Union where if one of us used nukes, we could tell the rest of the world to deal with it.

Daktoria says2015-05-02T10:26:06.1427186-05:00
Report Post
Anyway, you're right that the poll is a little outlandish, but the real point of the poll is to focus on deeper foreign policy issues. That's why this is not strictly "yes" or "no". There are lots of justifications people can take for their reasoning.

wrichcirw says2015-05-02T10:38:07.7839396-05:00
Report Post
@daktoria: "If either side used nukes, the rest of the world would hate them. We live in a multipolar world today. " This is precisely why neither side would risk a direct confrontation. It would very quickly escalate, like all wars, in order to determine the winner. This is why the USSR and the US never engaged in direct confrontation for nearly 50 years of Cold War. Therefore, a China/India conflict is simply an impossibility unless both parties were willing to risk an inevitable nuclear war.

wrichcirw says2015-05-02T10:39:16.9012564-05:00
Report Post
@daktoria: "the real point of the poll is to focus on deeper foreign policy issues. " Well, you can deepen the discussion by at least acknowledging that both countries are nuclear powers, and add that into your calculus.

wrichcirw says2015-05-07T19:20:07.4055938-05:00
Report Post
"They strictly maintain arsenals for the sake of deterrence." What they seek to deter is war. But, you're asking what would happen if they went to war. Deterrence is no longer a consideration once they actually war. Nukes would then be used in the same manner as all weapons of war are used in war - to destroy the enemy's capacity to wage war.

wrichcirw says2015-05-07T19:21:11.8812204-05:00
Report Post
I mean, one reason why we call our military department the "Department of Defense" is because a strong military is one of the best deterrents to war. It is a much better deterrent than the opposite...Having no military whatsoever.

SeanCoffey says2016-01-12T14:05:56.1225552Z
Report Post
I think US should use more flexible methods of dealing with national enterprises. New technologies have to be put into operation (for instance <a href="http://www.Brownpapertickets.Com/blogcomments/105889">virtual data room providers</a> offer VDR services). Intervening in a war is the last thing they could do.
Privacy Policy | Terms of Use
Sitemap | View Desktop Version
©2020 Debate.org. All rights reserved.