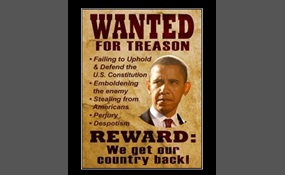 Should Barack Obama be removed from office?

MrFreeThinker says2015-07-16T14:35:09.9390055-05:00
Report Post
His executive orders bypass congress which is illegal. Misdemeanor is defined as a minor wrongdoing. He has obviously committed major acts of wrongdoings which justify impeachment.

58539672 says2015-07-16T14:56:49.6461066-05:00
Report Post
@MrFreeThinker He is well within his power as president to issue an executive order. Their is now law written anywhere that says he can't use that order to bypass congress (nor is he the first to do it). Congress has their own checks on the presidents informal powers that they can execute at anytime. And your ignoring the word "High" that is in front of crimes and misdemeanors. He has not broken the law, whether you like it or not.

58539672 says2015-07-16T16:10:05.7535405-05:00
Report Post
@MrFreeThinker None of those things are high crimes. None of those things are impeachable offenses. Previous presidents have murdered people (Im not talking figuratively. Some ACTUALLY murdered people) and not been impeached. That should put into perspective what a REAL impeachable offenses is, because the only president in ALL of US history who would have been found guilty of such a crime resigned before he could be convicted (its Nixon if you haven't figured it out).

Stefy says2015-07-16T16:35:13.3564466-05:00
Report Post
Hes not abusing executive power. Hes done less executive action and executive orders than any modern president. The only problem i see woth that is im against drone strikes. I swear conservatives hate when the executive and judicial branches have any power. Just trash checks and balances all together shall we?

MakeSensePeopleDont says2015-07-16T19:45:50.9101554-05:00
Report Post
Remove him from office and then what? Enjoy the remainder of the term with Biden in office? The best political move ever made in America was to have the worst Vice President possible backing you. Preventative maintenance LOL

Texas14 says2015-07-17T12:30:15.1598990-05:00
Report Post
@tajshar, and I'm not giving George W.Bush a pass either. Most of the presidents after world war two violated the constitution constantly and I'm not to give any of them a pass because I agree with them more than the others.
Privacy Policy | Terms of Use
Sitemap | View Desktop Version
©2020 Debate.org. All rights reserved.