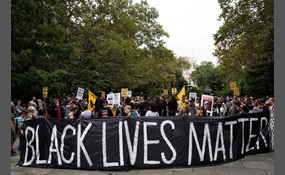 Black Lives Matter is a very important organization. Many (mostly ignorant) people misinterpret the name think it's saying ONLY BLACK LIVES MATTER when that is simple not the case. They are trying to show that blacks are being treated as second class citizens as if they don't matter in the eyes of the government.

kikiki says2016-12-11T08:13:19.0074484Z
Report Post
BLM is becoming more and more like a terrorist organisation. Let's recall, who also burns cars, shoots innocent civilians and sends death threats to those who disagree with them. OH, Al-Qaeda, ISIS, Hamas, Al-Nusra. BLM is blaming a few justified shootings on the entirety of the police force and look what happened to Baltimore.

No, it's fine the way it is

7 votes
1 comment
No, it's fine the way it is - Voter Comments

Yes, it makes the message clearer

Arget says2016-12-26T23:54:27.6171847Z
Report Post
Any semi intelligent and rational human being understand that the 'too' is implied. The mistake is that you should never underestimate the stupidity and ignorance (willful and otherwise) of mankind.
Vote & Comment
4

RickieDaDebater says2016-12-11T02:55:34.5514330Z
Report Post
Nationalism is a good promotable position too, saying "african-american" or any other nationality breaks the barriers

How does Chicago feel about it?

0 votes
0 comments
How does Chicago feel about it? - Voter Comments
No Comments
Vote & Comment
7

7Instead, they should put "provided that they are being threatened by whites".