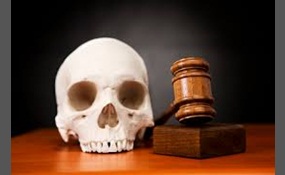 Should criminals be able to request the death penalty?

Here's the law currently (in the United States), you can ask for the death penalty, but the judge will not honor it and the criminal will be put on suicide watch. Also, is it bad I find Jodi Arias kind of cute?

No, the law is the law. And why should murderers get a choice of what they want? Criminals should not be able to decide their own fate.

Capital punishment, death penalty or execution is punishment by death. The sentence that someone be punished in this manner is a death sentence. Crimes that can result in a death penalty are known as capital crimes or capital offences. The term capi... tal originates from the Latin capitalis, literally "regarding the head" (referring to execution by beheading). Capital punishment has, in the past, been practiced by most societies, as a punishment for criminals, and political or religious dissidents. Historically, the carrying out of the death sentence was often accompanied by torture, and executions were most often public. 36 countries actively practice capital punishment, 103 countries have completely abolished it de jure for all crimes, 6 have abolished it for ordinary crimes only (while maintaining it for special circumstances such as war crimes), and 50 have abolished it de facto (have not used it for at least ten years and/or are under moratorium). Nearly all countries in the world prohibit the execution of individuals who were under the age of 18 at the time of their crimes; since 2009, only Iran, Saudi Arabia, and Sudan have carried out such executions. Executions of this kind are prohibited under international law. Capital punishment is a matter of active controversy in various countries and states, and positions can vary within a single political ideology or cultural region. In the European Union member states, Article 2 of the Charter of Fundamental Rights of the European Union prohibits the use of capital punishment. The Council of Europe, which has 47 member states, also prohibits the use of the death penalty by its members. The United Nations General Assembly has adopted, in 2007, 2008, 2010, 2012 and 2014 non-binding resolutions calling for a global moratorium on executions, with a view to eventual abolition. Although many nations have abolished capital punishment, over 60% of the world's population live in countries where executions take place, such as China, India, the United States and Indonesia, the four most-populous countries in the world, which continue to apply the death penalty (although in India and in many US states it is rarely employed). Each of these four nations has consistently voted against the General Assembly resolutions   more
7 votes
2 comments
No, the law is the law. And why should murderers get a choice of what they want? Criminals should not be able to decide their own fate. - Voter Comments

Yes, for death penalty-worthy crimes if the sentence is life imprisonment.

Yes, for any crime.

South Carolina appellate attorney Joe Savitz did everything he could to try to prevent the execution of Michael Passaro — not necessarily because he believed in his innocence, but because Passaro wanted to die. Last September, Passaro was executed ... for the 1998 death of his daughter. Passaro was in a custody dispute with his second wife in November 1998 when he doused his van with gasoline, strapped 2-year-old daughter Maggie inside and then sat down in his car before lighting it on fire. However, before the fire could consume him, Passaro jumped out of the car but left Maggie to die. Passaro pleaded guilty to murder in 2000 and requested — and received — the death penalty. Passaro did not, and never wanted, to appeal his guilty plea, and rejected his attorneys' attempts to help him. Savitz argued that Passaro should not be executed because he would see it as a reward, not punishment. Passaro, Savitz said, had a long-standing death wish to join his first wife, who was killed in 1992 when a car struck her while she was trying to help an accident victim. "He does not see the death sentence as punishment. He sees it as an escape from punishment," Savitz said before Passaro's lethal injection. "He believes that he will be reunited with his first wife and the child that he killed, Maggie. He wants to die and has gotten the state to help him carry it out in what is essentially a state-assisted suicide. He is not doing this because he feels a sense of remorse." According to the Death Penalty Information Center, a group opposed to capital punishment, Passaro's execution was one of seven "volunteer" executions in 2002, where death-row prisoners relinquished their remaining appeals and opted to be put to death. More death-row inmates have been volunteering for their executions: Between 1993 and 2002, 75 volunteered for death, compared to the 22 consensual executions between 1977 and 1992. (Gary Gilmore, the first prisoner put to death after the Supreme Court reinstituted capital punishment in 1976, "volunteered" for his execution in 1977 because he did not want to live the rest of his life on death row.) Some critics argue that this shows that, contrary to popular belief, death is not the ultimate punishment for prisoners. "One could argue that life in prison is the worst kind of punishment and not the death penalty," said Richard Dieter, DPIC's executive director. "So many people wouldn't be volunteering for it if it was so bad." Death Row’s Psychological Torture Over the past 10 years, more death-row inmates have preferred execution to facing seemingly endless years of appeals. Some inmates had been on death row for more than 10 years and seemed to grow tired of appealing their cases, not knowing when or if they were going to die. Others, like Passaro and Oklahoma City bomber Timothy McVeigh in 2001, chose not to pursue their appeals either at all or to their fullest extent. Experts say prison conditions as well as increasing reluctance by governors and courts to grant clemency and appellate relief to inmates have helped fuel the rise in volunteer executions   more
2 votes
1 comment
Yes, for any crime. - Voter Comments

Yes, for any major crime, but those convicted with life should not be allowed to choose.

A Belgian murderer and rapist serving a life sentence is to be allowed to have doctors end his life following a ground-breaking ruling under laws in Belgium permitting people to request euthanasia. Frank Van Den Bleeken had argued that he had no pr... ospect of release since he could not overcome his violent sexual impulses and so he wanted to exercise his right to medically assisted suicide in order to end years of mental anguish. "Over recent years, he has been seen by several doctors and psychologists and their conclusion is that he is suffering, and suffering unbearably," his lawyer, Jos Vander Velpen, told state broadcaster VRT. The judicial ruling was the first involving a prisoner since the euthanasia law was introduced 12 years ago. It was not clear when the medical procedure, to be conducted in a hospital, would take place, the lawyer added. Because he was a prisoner, his client's request had been dependent on the consent of the justice ministry. Belgium, like the rest of the European Union, does not have a death penalty. Van Den Bleeken, aged about 50 and in prison for nearly 30 years, had complained of a lack of therapy provided for his condition in Belgium and therefore he preferred to die. "If people commit a sexual crime, help them to deal with it," he said in a television documentary. "Just locking them up helps no one: not the person, not society and not the victims." Predominantly Roman Catholic Belgium is not the only country in Europe to provide a right to die but it has pioneered the application of the law beyond the terminally ill. Cases which attracted international attention included the euthanasia of two deaf men, twins, who were in the process of also losing their sight and of a transgender person left in torment by an unsuccessful sex change operation. In February, Belgium became the first country to allow euthanasia for terminally ill children at any age, a move which drew criticism from religious groups both at home and abroad, though application for minors is limited to those about to die   more
0 votes
0 comments
Yes, for any major crime, but those convicted with life should not be allowed to choose. - Voter Comments
No Comments
Vote & Comment
Leave a comment...
(Maximum 900 words)

Midnight1131 says2015-05-16T16:19:18.3440159-05:00
Report Post
No, if it's a minor crime, then by committing suicide, they will not have gone through the same process that someone requesting the death penalty would've. Committing suicide is very different then asking someone to kill you, I believe that most people would have a problem with killing someone who committed a minor crime.

Midnight1131 says2015-05-16T16:34:24.8371630-05:00
Report Post
If it's life imprisonment without parole, it basically is the same outcome as the death penalty. Because the criminal would die as an imprisoned convict, in both cases. Compared to a minor crime, they will eventually be reintegrated into society, after they've done their time.