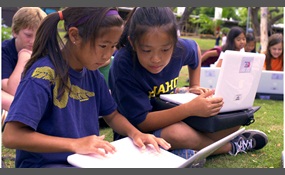 Should Games Be allowed on Punahou School computers?

Ban games during school but allow them after school

Punahou School, once known as Oahu College, is a private, co-educational, college preparatory school located in Honolulu CDP, City and County of Honolulu in the U.S. State of Hawaii. With about 3,760 students attending the school, in kindergarten th... rough the twelfth grade, it is the largest independent school in the United States.Founded in 1841, the school has a rich history, a wide variety of programs and many notable alumni. Along with academics and athletics, Punahou offers visual and performing arts programs. In 2006, Punahou School was ranked as the "greenest" school in America. The student body is diverse, with student selection based on both academic and non-academic considerations. In 2008 and 2009, Punahou's sports program was ranked best in the country by Sports Illustrated.U.S. President Barack Obama graduated from Punahou in 1979   more
1 vote
0 comments
Ban Video Games! - Voter Comments
No Comments
Vote & Comment
4

There are other ways to play games on the computers