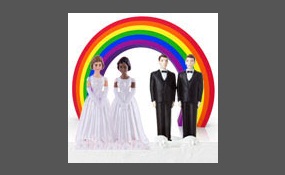 Should gays be allowed to marry?

Explain why you think so in the comments.

Yes. People should be allowed to marry whomever they love.

19 votes
6 comments
Yes. People should be allowed to marry whomever they love. - Voter Comments

carleeflanagan says2015-04-28T19:51:26.6699504-05:00
Report Post
people are equal and they cant change who they love, so why make them feel so out of place because they love someone of the same gender? i believe that people should be free to marry who they want and spend their life with whomever they want. people dream of happy lives and america is supposed to be a place where there is "liberty and justice for all" and its unjust to say that because someone loves someone of the opposing gender that they don't get the same rights as the people that do like people of the same gender. theres alot of studies now trying to decide if its something from birth that you naturally have or whether it is a thing you develop over time. so people who are gay or lesbian have no power over who they love. its about whats on the inside and not the physical things.

No. Marriage should be clearly defined as between a man and a woman.

10 votes
1 comment
No. Marriage should be clearly defined as between a man and a woman. - Voter Comments

Varrack says2015-04-28T18:37:17.8900149-05:00
Report Post
I've done debates on this, and so far I have not yet seen a legitimate rebuttal to the statement that marriage is indeed between heterosexual couples. I'm open-minded however, but until the day I do I must stick with traditional marriage as it is the only logical definition of marriage that I have encountered.
Vote & Comment
3

Yes. I don't agree with it but it is not my right or the government's to decide.

4 votes
1 comment
Yes. I don't agree with it but it is not my right or the government's to decide. - Voter Comments

Yes. But allow churches the right to refuse to hold gay marriage ceremonies.

No. They should be allowed civil unions but don't call it marriage.

1 vote
1 comment
No. They should be allowed civil unions but don't call it marriage. - Voter Comments

Mathgeekjoe says2015-04-28T18:23:49.1436721-05:00
Report Post
I also agree with that marriage is between a man and a women. Anyways, I believe civil unions should provide the same legal benefits as marriage, that makes it so that everyone gets the same rights.
Vote & Comment
Leave a comment...
(Maximum 900 words)