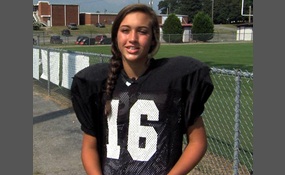 Should girls be allowed to play american football

Should girls be able to play american football?

Gustav_Adolf_II says2015-01-06T13:47:42.0963665-06:00
Report Post
But only if they can prove they're competent like everyone else has to. I don't want there to be one of these things where there are gender based quotas a league has to make because that is BS in my opinion, making the team should depend on skill, not genitals.

wildmanz says2015-01-05T19:12:13.1406867-06:00
Report Post
yes because if it wasnt there would be so many suits and riots and all the stuff that goes with it although it noone played we would be better off and have more athletes in other events

ROFLMFAO says2016-03-05T17:46:15.0428595Z
Report Post
Yes because boys and girls are made different. Like in futbol A girl got hit in the stomach with the soccerball and started crying. The only expression I has was BRUH. And with football the same thing can happen.

Mharman says2016-09-24T20:03:25.5614319Z
Report Post
Why do I say say this? It isn't safe for women to be playing football with men. Men in general have big, stocky bodies, whereas women is general have slender, fragile bodies. The idea of J.J. Watt charging into a woman for a huge loss of yards makes me shudder.
Vote & Comment
3

No is a 2012 Chilean drama film directed by Pablo Larraín. The film is based on the unpublished play El Plebiscito, written by Antonio Skármeta. Mexican actor Gael García Bernal plays René, an in-demand advertising man working in Chile in the late 1... 980s. The historical moment the film captures is when advertising tactics came to be widely used in political campaigns. The campaign in question was the historic 1988 plebiscite of the Chilean citizenry over whether dictator Augusto Pinochet should stay in power for another eight years.At the 85th Academy Awards the film was nominated for the Best Foreign Language Film Oscar   more
13 votes
5 comments
No - Voter Comments

dietorangesoda says2015-01-05T17:22:48.5020830-06:00
Report Post
i think not but to be honest i dont think boys should be playing that violent game i would never let my son play it it's a violent and barbaric sport and absoultely rules in this country which is stupid no son of mine is risking a permanent brain injury for some stupid trophy

fernandez_101 says2015-01-09T11:57:58.6903741-06:00
Report Post
They are not aggressive as male football players, they also have breasts which allow them to experience pain above their comprehension. - Girls are not fast enough - Girls are not strong enough
Vote & Comment
4

No One Should Play Football, Period

They are able. We shouldn't cripple them.

0 votes
0 comments
They are able. We shouldn't cripple them. - Voter Comments
No Comments
Vote & Comment
Leave a comment...
(Maximum 900 words)

Tonius5 says2015-01-05T19:20:22.3524383-06:00
Report Post
I remember playing football in 9th grade. It was full contact and mixed gender. I treated everybody in there equally. I ended up knocking over a girl trying to defend the ball and got kicked out for violence against a female...

Mharman says2016-09-24T20:16:00.5906718Z
Report Post
Look, there are separate leagues for men and women in golf, basketball, baseball/softball, track and field, hockey, swimming, and many others. Why can't it be the same for football? It's not safe for the women by body shape and size. The idea of of a huge male 300-pound linebacker charging into slender female runningback makes me shudder. Plus, there already is a women's football league.

ryangill says2016-11-10T02:59:44.5625919Z
Report Post
Girls are not strong enough niqqa if they are they ate fuqing 200 pounds of mcdonalds and got fat as shit so then they could play linemen but doubt anyone gonna do dat shit niqqa
Privacy Policy | Terms of Use
Sitemap | View Desktop Version
©2020 Debate.org. All rights reserved.