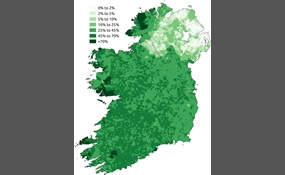 Should Ireland slowly transition to an Irish-speaking country?

There are a lot of opinions over the language of Ireland. The English language is most commonly spoken because it is the colonial language. However, some Irish speakers would rather speak their own language and may have difficulty accessing documents in that language.

Irish is the rightful language of Ireland. Just like France speaks French and Denmark speaks Danish, Ireland should speak Irish. Schools should offer a good English program much like other countries, but the main language taught and spoken will be I... rish   more
7 votes
2 comments
Yes, Ireland should become an Irish-speaking country. - Voter Comments

No, English should be the main language.

English is more commonly spoken than Irish, so English should continue to be Ireland's main language. If people want to learn and speak Irish, they can learn it in school as a second language and move to an Irish speaking community to practice speak... ing and being able to use it   more
2 votes
1 comment
No, English should be the main language. - Voter Comments