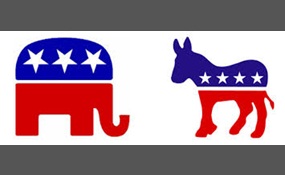 Should it be Illegal for Political Parties to Run Candidates? (in the United States)

Do you believe that it would increase democracy in the United States if we made it illegal for Political Parties to run candidates. The idea behind this is that if we make it illegal, people would have to vote for candidates based on their actual beliefs and not for their party affiliation.

No, We Shouldn't Make it Illegal

6 votes
3 comments
No, We Shouldn't Make it Illegal - Voter Comments

imabench says2015-06-18T22:15:39.1264286-05:00
Report Post
The entire point of political parties is to help people get elected in the first place and organize people to support that person. Take away that and you would be better off just instituting a lottery system where whoever won gets to be president for a term

Yes, We Should Make it Illegal

2 votes
1 comment
Yes, We Should Make it Illegal - Voter Comments

We should let those already in power pick their successors.