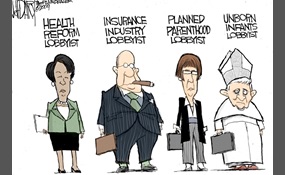 Should lobbing in politics be made illegal? (Explanation below)

Lobbing has become a common play in US politics, however many believe this gives small groups too much power.

Set some restrictions on their powers

They are too powerful and need to be stopped.
6 votes
2 comments
Yes - Voter Comments

themightyindividual says2015-09-01T22:32:34.0575988Z
Report Post
Lobbies are the main source of corruption in government in the United States. Having dealt with these people myself I can tell you that there is nothing they won't do to further their agenda.
Vote & Comment
3

Norway, officially the Kingdom of Norway, is a sovereign and unitary monarchy whose territory comprises the western portion of the Scandinavian Peninsula, Jan Mayen, and the Arctic archipelago of Svalbard. The Antarctic Peter I Island and the sub-An... tarctic Bouvet Island are dependent territories and thus not considered part of the Kingdom. Norway also lays claim to a section of Antarctica known as Queen Maud Land. Until 1814, the Kingdom included the Faroe Islands, Greenland, and Iceland.Norway has a total area of 385,252 square kilometres and a population of 5,109,059 people. The country shares a long eastern border with Sweden. Norway is bordered by Finland and Russia to the north-east, and the Skagerrak Strait to the south, with Denmark on the other side. Norway has an extensive coastline, facing the North Atlantic Ocean and the Barents Sea.King Harald V of the House of Schleswig-Holstein-Sonderburg-Glücksburg is the current monarch of Norway. Erna Solberg became Prime Minister in 2013, replacing Jens Stoltenberg. A constitutional monarchy since 1814, state power is divided between the Parliament, the King and his Council, and the Supreme Court   more
0 votes
0 comments
No - Voter Comments
No Comments
Vote & Comment
No comments yet.
Leave a comment...
(Maximum 900 words)
Privacy Policy | Terms of Use
Sitemap | View Desktop Version
©2021 Debate.org. All rights reserved.