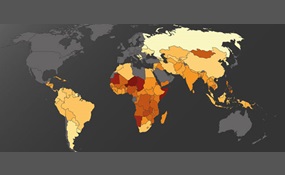 Should nations prepare for the effects of climate change instead of preventing it?

themightyindividual says2016-02-17T05:49:04.6720762Z
Report Post
Since climate change is only about 5% our fault, and out of that five percent, only about 50% can be stopped, and by stopping that approximately 2.5% of global warming we would end industrial life as we know it and wind up killing the 5+ billion people made possible by the industrial revolution, it would be best to just build some walls around Florida condos, invest heavily inland, and call it a day.

bobmac says2016-02-17T07:47:56.0040313Z
Report Post
Efforts to prepare for the effects would be much more efficient and much more effective. Methods that would try to prevent it would put constraints on human growth.

aferster says2016-02-21T17:18:24.6145625Z
Report Post
The data that continues to be acquired is the strongest evidence to either support or not support this decision. The data that has been gather since 2000 clearly shows that the global warming trend has stopped increasing but rather shows a slight cooling. This fact strongly suggests that spending money to reverse what is perceived as a continued global warming trend is unnecessary since nature has done this for us!
Vote & Comment
2

Norway, officially the Kingdom of Norway, is a sovereign and unitary monarchy whose territory comprises the western portion of the Scandinavian Peninsula, Jan Mayen, and the Arctic archipelago of Svalbard. The Antarctic Peter I Island and the sub-An... tarctic Bouvet Island are dependent territories and thus not considered part of the Kingdom. Norway also lays claim to a section of Antarctica known as Queen Maud Land. Until 1814, the Kingdom included the Faroe Islands, Greenland, and Iceland.Norway has a total area of 385,252 square kilometres and a population of 5,109,059 people. The country shares a long eastern border with Sweden. Norway is bordered by Finland and Russia to the north-east, and the Skagerrak Strait to the south, with Denmark on the other side. Norway has an extensive coastline, facing the North Atlantic Ocean and the Barents Sea.King Harald V of the House of Schleswig-Holstein-Sonderburg-Glücksburg is the current monarch of Norway. Erna Solberg became Prime Minister in 2013, replacing Jens Stoltenberg. A constitutional monarchy since 1814, state power is divided between the Parliament, the King and his Council, and the Supreme Court   more
6 votes
2 comments
No - Voter Comments

komododragon8 says2016-02-17T01:53:40.7168745Z
Report Post
Shouldn't do anything, if we do find a way to stop it the climate deniers will simply say "see there was no climate change in the first place" the only way humanity will learn to listen to experts is to punish them whenever they ignore a scientist warning them of a catastrophe. Once we've buried our dead and rebuilt our cities, the lessons we learned will forever be burned into our memory in the same way the the holocaust stood as a stark reminder to Europe of the dangers of fascism.
Vote & Comment
Leave a comment...
(Maximum 900 words)

JoshM says2016-02-23T05:12:21.6692074Z
Report Post
Agreeing with Lukas8, they should do both. Climate change already is inevitable. However, action should also be taken to prevent it from getting much worse.

TheTruthInFacts says2016-03-02T03:45:11.5024545Z
Report Post
They should prepare. We don't know what earth is gonna throw at us. Global warming can't be stopped unless we shot the sun climate lower.(but that would lead to extreme freezing) Just take the dinosaurs, you didn't see them stop the meteor. Why? Because they couldn't. Earth forces cannot be controlled by anything, except for earth itself, not even the most successful species can change it. (Unless they evolve for more than five hundred million years, which we will problem already be colonizing other planets.)
Privacy Policy | Terms of Use
Sitemap | View Desktop Version
©2022 Debate.org. All rights reserved.