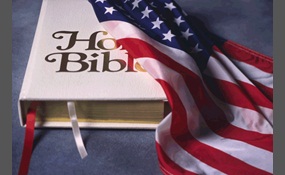 Should school sponsored prayer be allowed?

This is an issue brought up by more religious people who want the schools to sponsor prayer time. What do you guys think?

No they should not

25 votes
8 comments
No they should not - Voter Comments

discomfiting says2014-06-21T19:09:41.2168023-05:00
Report Post
No because then you have Muslims, Pagan, Irreligious people and the entire spectrum of religious people complaining about their children being forced into Christianity. Keep religion out of schools! Besides the bible even tells you to not pray in public!

TheOneandOnlyRuffian says2014-06-22T13:48:38.0885821-05:00
Report Post
Why should a single religion hog the whole intercom? That would be saying that that religion is superior. If all religions were included, which would be improbable or impossible, what about non religious students? Either way, someone would be insulted.

AdventurerExplorer says2015-06-10T01:11:08.1178269-05:00
Report Post
I wonder how religious folks will react when they say "Put prayer back in schools" and then get a bunch of students bowing down to some statues xD that will really piss them off
Vote & Comment
2

Yes but only Christian prayer

I added this because when I have noticed much of the action around this issue is focused on Christian prayer so for those of you who take the position that this should not include prayers for Muslims and Hindus this is for you.
7 votes
0 comments
Yes but only Christian prayer - Voter Comments
No Comments
Vote & Comment
3

FOGlower says2014-06-21T19:36:39.6423699-05:00
Report Post
If we can have christian prayer back at the cost of everyone praying then I don't care. Lets all just get in one room and do our own thing. I bet an atheist would look into the room and think it was a nut house, but everyone in that room are just holding true to what they truly believe in.
Vote & Comment
Leave a comment...
(Maximum 900 words)