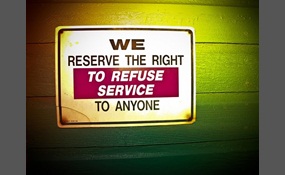 Should small businesses/small service providers reserve the right to refuse service to anyone?

A small business here is defined as places who don't answer to larger corporations. They usually own one or two stores and do reserve the right to refuse service to anyone, public businesses and large businesses do not.

Small businesses should reserve the right to reserve service to anyone. This is capitalism and they own the business, it's the customers choice to go there and if they don't like it then they can go somewhere else.
12 votes
5 comments
Yes, to all - Voter Comments

garfield2710 says2014-08-06T13:51:17.3177491-05:00
Report Post
People should have the right to refuse to serve anybody for any reason, including race, religion, sexual orientation, gender, age or even hair color for all I care. If the market feels it's unfair, then that business will go out of business, or it will attract people with similar beliefs. If you are turned away from a business, you can go to another one, where people will be more likely to treat you better, and you give your money to people who are willing to serve you.

cludwig says2014-08-06T14:24:00.8900628-05:00
Report Post
It is their establishment in which they pay taxes, rent, permits, etc, etc. They have paid for the right to choose who they serve. That being said, any business must be careful in this regard as social media and bad online reviews can devastate a business.

Leaning says2019-05-04T18:34:48.2730180Z
Report Post
I think people ought have a right to manage and share/trade their property as they wish. Though I would consider it immoral in many cases, Freedom/free will is important. Just trying to straightjacket people into what 'you consider 'correct behavior tends to be counterintuitive I think. Life isn't better by just saying OBEY. There would be limits, Example a natural disaster, And there's only one food business standing. I also think that businesses that are more open and tolerant would be more successful as 'good behavior usually is, In the long run at least.
Vote & Comment
2

Yes, but only to customers that are known to be rude/disruptive/harrasers/etcetera

This is before they enter the facility or before they order something. If a customer is harassing others after they order something then by law the business may kick them out. Sometimes customers can really ruin the sanctity of a small business. Thi... s happens a lot with big businesses as well because some people either just have no patience or are mean in general, especially if they are harassing employees. Small business bars sometimes have this issue where customers come in and are always generally disruptive, forcing the bartender or bouncer to kick them out   more
8 votes
3 comments
Yes, but only to customers that are known to be rude/disruptive/harrasers/etcetera - Voter Comments

Yes, but mainly to people who are transsexuals and/or homosexuals/bisexuals

This issue mainly occurs with institutions that have to deal with religious issues, such as marriage. Some people find it uncomfortable and/or wrong to serve those who are homosexuals/bisexuals/transsexuals and thus refuse service to them depending ... on the situation. Others believe that it is morally wrong and automatically feel the need to kick them out   more
2 votes
0 comments
Yes, but mainly to people who are transsexuals and/or homosexuals/bisexuals - Voter Comments
No Comments
Vote & Comment
4

No, small businesses/small service providers should not have the right to refuse service to anyone

Everyone should be treated equally. By law, if the customer is harassing the employees, or even other customers, then the business is allowed to kick them out.
2 votes
0 comments
No, small businesses/small service providers should not have the right to refuse service to anyone - Voter Comments
No Comments
Vote & Comment
5

Currently, this is against the law, but in order to ensure a pure capitalistic system all businesses should be allowed to refuse service to anyone.
0 votes
0 comments
Yes, public and large businesses as well - Voter Comments
No Comments
Vote & Comment
6

Yes, but mainly people who are of a different race

This used to be a hot issue back during the segregation period. Many people felt that those of a different race didn't deserve to be serviced at a small business because they were "lesser" or they deserved to go to a service providers that were segr... egated and only offered services to their race. Others feel uncomfortable serving those of a different race or they feel that they contaminate the business and discourage others from going there   more
0 votes
0 comments
Yes, but mainly people who are of a different race - Voter Comments
No Comments
Vote & Comment
7

Yes, but mainly people of a different social class

This issue still applies today. Many businesses in "richer" areas refuse service to those who or poorer or look poorer. Sometimes the issue comes from what they are wearing, even if they can afford to pay for what the service provides. Others feel t... hat if poorer people visit the service provider then it gives them a bad reputation. Others also feel that poorer people won't buy that much, or the more expensive goods, and thus are bad for business   more
0 votes
0 comments
Yes, but mainly people of a different social class - Voter Comments
No Comments
Vote & Comment
Leave a comment...
(Maximum 900 words)