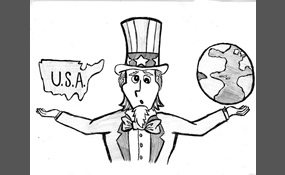 Should The U.S. Be Isolationist or Interventionist?

Isolationalism (Yes we should mind our own business and focus on what's happening at home!)

6 votes
0 comments
Isolationalism (Yes we should mind our own business and focus on what's happening at home!) - Voter Comments
No Comments
Vote & Comment
2
VOTING CLOSED

Interventionism (We should use our power and influence to shape our global community because nobody is capable!)

5 votes
1 comment
Interventionism (We should use our power and influence to shape our global community because nobody is capable!) - Voter Comments

58539672 says2016-02-19T02:12:16.7968273Z
Report Post
Between these two extremes, US interventionism has been more effective at maintaining the status quo and, ironically, the closest thing to peace we have ever known.. A form of middle ground would be better however.
Vote & Comment
3
VOTING CLOSED

Neither - Cooperative, Rather than Competitive

Carolean_Karl says2016-02-19T19:38:43.6054542Z
Report Post
I think the USA needs to clean up it's act in the middle east, then it can adopt an isolationist policy. Just like a child needs to clean up their messes before they can do something else.

mikey2003 says2017-01-08T17:43:02.7671634Z
Report Post
The US should not need to be the police of the world but they should monitor what happens in there hemisphere that is why they care so much about Cuba it is 90 miles away and could launch bombs on Miami there is no such thing as complete isolation or interventionism you can not isolate yourself from the rest of the world completely because then you have allies that you have to help out terrorist wont leave your country alone they will still attack you and you still have to trade with foreign countries that have products that your citizens have come to depend on that being said you really cannot truly isolate yourself from the rest of the world while I think the US should intervene more than isolate themselves they don't have to monitor every country and keep track of what is happening and step in if there is a conflict because that is going overboard and you end up trying to control the whole world you shouldn't do that but you should still intervene and try to keep peace throughout the world by using force and diplomacy to help your allies.
Privacy Policy | Terms of Use
Sitemap | View Desktop Version
©2022 Debate.org. All rights reserved.