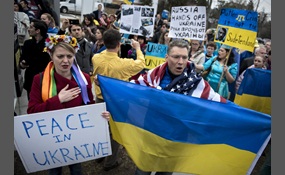 Should the U.S. Military Intervene in Ukarine?

discomfiting says2014-07-18T21:08:07.7156816-05:00
Report Post
not ground forces but yes with air forces or some other thing; Russia keeps getting more violent. At first I was against intervention, I was just for sanctions and trying to destroy their economy. But now that Russia is aiding terrorists and shooting down civilian planes without a sign of remorse and acting as if it's okay, because it's NOT! Theodore Roosevelt said "speak softly, and carry a big stick"; we say our words without yelling or with intent of using violence but make it clear we won't hesitate if the cross the red line.
Vote & Comment
2
VOTING CLOSED

Yeasts are eukaryotic microorganisms classified in the kingdom Fungi, with 1,500 species currently described. Yeasts are unicellular, although some species with yeast forms may become multicellular through the formation of strings of connected buddi... ng cells known as pseudohyphae, or false hyphae, as seen in most molds. Yeast size can vary greatly depending on the species, typically measuring 3–4 µm in diameter, although some yeasts can reach over 40 µm. Most yeasts reproduce asexually by mitosis, and many do so by an asymmetric division process called budding.By fermentation, the yeast species Saccharomyces cerevisiae converts carbohydrates to carbon dioxide and alcohols – for thousands of years the carbon dioxide has been used in baking and the alcohol in alcoholic beverages. It is also a centrally important model organism in modern cell biology research, and is one of the most thoroughly researched eukaryotic microorganisms. Researchers have used it to gather information about the biology of the eukaryotic cell and ultimately human biology. Other species of yeasts, such as Candida albicans, are opportunistic pathogens and can cause infections in humans   more
1 vote
0 comments
Yea - Voter Comments
No Comments
Vote & Comment
Leave a comment...
(Maximum 900 words)

ischreib45 says2014-07-22T12:44:55.6001859-05:00
Report Post
I'm so torn on military intervention, part of me says that we need to stop Russia from its violent campaign, the other half says that any intervention would start an even larger conflict which might not be worth it.

PreferNotToBeLabeled says2014-07-22T14:02:34.2241731-05:00
Report Post
They annexed Crimea and now they are supporting Pro-Russian rebels with equipment and weapons in Eastern Ukraine. Russia can use the excuse that the USA has invaded countries. Well guess what Russia, the USA hasn't annexed any country it's invaded in the Middle East unlike you are doing.
Privacy Policy | Terms of Use
Sitemap | View Desktop Version
©2020 Debate.org. All rights reserved.