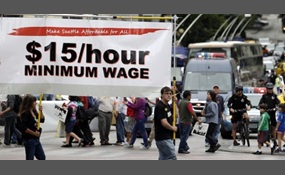 Should the US minimum wage be $15?

Sound off in the comments below explaining your reasoning.

Jack_D says2015-04-18T20:35:22.7181593-05:00
Report Post
Nothing wrong with a minimum wage per se; but this # is Way too high; it will lead to higher unemployment and/or further automation. Better to use tax credits/housing subsidies to help the poor. Or even my radical idea of allowing customers to tip fast food workers like they do waiters/baristas.
Vote & Comment
2

YES BANK is a private bank in India with headquarters in Mumbai. It was founded in 2004 by promoters Ashok Kapur and Rana Kapoor, which had a collective shareholding of 29%. Ashok Kapur was killed in a terrorist attack in 2008 in Mumbai.In 2010, the...  bank announced the roll-out of a strategic blueprint, named Version 2.0 of the bank, to further accelerate its business growth in the retail banking space, with the objective to achieve by 2015, a balance sheet size of 1,500 billion, deposits of 1,250 billion, advances of 1,000 billion, a pan India network of 900 branches and a human capital base of 12,750 by 2015   more
2 votes
1 comment
Yes - Voter Comments

Stefy says2015-04-16T21:25:04.2333435-05:00
Report Post
Creates a positive economic cycle and less impovrished people. Also if wages had kept up with productivity theyd be 20 dollars. That and the businesses which employ the most min wage workers (Walmart, big fast food) can certainly afford it.
Vote & Comment
Leave a comment...
(Maximum 900 words)

Episteme says2015-04-16T19:35:35.7292704-05:00
Report Post
Ooh. This is tricky! Now, $15 per hour in some areas would not actually make it that much easier to live in certain areas. For example - in New York the living wage for one adult would be $12.75 per hour - while for two adults it goes up to $17 per hour. However, in say, North Carolina, two adults could actually live off of $14 per hour. Http://livingwage.Mit.Edu/places/3606151000 http://livingwage.Mit.Edu/states/37 In State's such as North Carolina, paying ones employees $15 might not be feasible for that individual business. However, in New York, it probably would be feasible because a number of companies should already provide at least $12.75 per hour just to live in New York. I think that the minimum wage should be dependent on the state (or even the county) and not necessarily a one price fits all idea - since each business will simply have different resources to provide to its employees.

Trustmeinlying says2015-04-17T13:30:18.8893822-05:00
Report Post
@Stefy My father and step-mom make 20 dollars an hour for making driveshafts. People at big Fast food places don't need 20 dollars for doing nothing but flipping burgers and fixing bags. Compared to other jobs that actually need you to have skill they should be happy with the money they get for such an easy job.