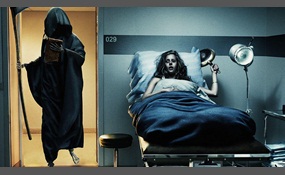 Should the world invest research into making the populace immortal?

Immortality is a tricky thing, but it may be possible with enough research. Should we try? If you choose a "yes" answer, the "gift" will obviously be optional, presuming everyone or most can have it.

No, I want to die eventually

Yes, but only to prevent death from natural reasons such as aging and diseases

Some people don't want to die, they may want to live forever. Maybe we can make it so that we are like the Turritopsis dohrnii, the immortal jellyfish, and can "rebirth" at and to a certain age anytime we want. If this happens then all diseases won'... t affect us as well. However, we still should be able to die by physical means   more
6 votes
1 comment
Yes, but only to prevent death from natural reasons such as aging and diseases - Voter Comments

discomfiting says2014-07-09T01:51:54.4775137-05:00
Report Post
I don't think immortality is a gift or something anybody should want. No human can cope with the psychological problems of loving and losing and having to ALWAYS live and never see those people again. Eventually wouldn't you just want it to all end? Besides, there's also the sociological factors like the evolution of a society. 300 years ago, racism, sexism, bigotry in the purist and most inhumane kind existed in America, without death, honestly, nothing really wouldn't changed. Death allows ignorance and bigotry to die off. Look at the U.S. We keep fighting for equality and keep changing the society we live in, do you think 300 years ago, they would be even the slightest okay with the world. In 300 years, you might not be so happy with what they're doing either. Death is a blessing and immorality is a curse.
Vote & Comment
3

Yes, we should try to make ourselves immune to all forms of physical harm.

Some people just don't want to die, at all. We should all be completely immortal and only confinement can permanently stop those who seek to do the world harm, but why would it matter? None of us can be harmed. We can spend an eternity with our love... d ones, never having to deal with loss   more
3 votes
1 comment
Yes, we should try to make ourselves immune to all forms of physical harm. - Voter Comments

Yes, but only certain people should be able to become immortal

Immortality can obviously be abused, thus it shouldn't be universally distributed. There should be a certain criteria in order for someone to get this vaccine or genetic modification. We can't let the monsters of our society get their hands on this ... gift   more
3 votes
2 comments
Yes, but only certain people should be able to become immortal - Voter Comments

Realistic_debate says2014-07-08T23:45:18.5765808-05:00
Report Post
The reason i picked this is so evil people cant take advantages of it so what i think should happen is that people with secure mental, emotional and no history of criminal charges
Vote & Comment
5

No, don't tread into this territory

We are made to be able to die. If you're human and you can't die then you are a monster. This is a violation of nature and/or God. Any attempt at making a human immortal should never happen and be stopped immediately.
2 votes
2 comments
No, don't tread into this territory - Voter Comments

No, you can't cheat death

People should be able to die and that's the end of it. Granting immortality to someone, anyone, should never be done. We have more important things to focus on.
1 vote
1 comment
No, you can't cheat death - Voter Comments

No, the abuse would be too much

Criminals and those with a foul mind always end up getting their hands on things we don't want them to have. This could prove dangerous and some people may abuse their immortality by harassing others.
1 vote
1 comment
No, the abuse would be too much - Voter Comments

Yes, but we should vote on who can be immortal

The general populace should not be allowed to have this gift. Perhaps it would be best if we voted for who should be able to live forever. Maybe we can make this person our leader and we would never have to worry about someone corrupt killing them o... r replacing them. We could also choose to have a small immortal army. Those who would always be sent out to prevent any deaths and to keep the peace   more
0 votes
0 comments
Yes, but we should vote on who can be immortal - Voter Comments
No Comments
Vote & Comment
Leave a comment...
(Maximum 900 words)

perfectjfl says2014-07-09T01:17:51.6396898-05:00
Report Post
If people are immortal and we keep reproducing at the current rate, the resources will eventually run out and all humans will be dead. Even if we somehow manage to live without resources, the world will be over-crowed and there will be no space left for everyone. I think that if people choose to be immortal, they should give up their reproductive right. In other words, you either live indefinitely or you have children.

stevia333 says2014-07-10T07:55:07.7219377-05:00
Report Post
NO because the earth would be unsustainable without population control primarily meaning birth control or eugenics, meaning that even if we could live forever there would be tons of suffering and if one were to choose to be immortal and they did not want to live anymore due to suffering & they wouldn't be able to change their minds. Now if the immortality is based on something reversable that defies the concept of living forever without peril, because if some unseen outside force reversed the conditions for you then there would still be risk for peril and hence you could still die. PERSONALLY THE PERK OF NOT BEING MORTAL AND NOT LIKE GOD IS THE FACT THAT YOU CAN CHOOSE WHETHER YOU LIVE OR DIE!!! BASICALLY WE CAN KILL OURSELVES AND GOD CANNOT, if God is in the Abrahamic religious sense of the concept! So if too many people are immortal they will have to adapt and also live could get boring to the point of wanting to die but never being able to die. Immortality would just suck to live and ruin the sanctity of life depends on dying like #YOLO implies that life will end someday and you won't get it back.
Privacy Policy | Terms of Use
Sitemap | View Desktop Version
©2020 Debate.org. All rights reserved.