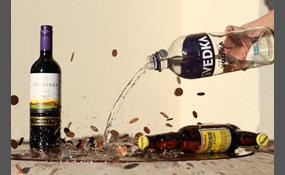 Should there be harsher alcohol taxes?

An Alcohol Tax is a tax where alcoholic beverages are taxed. Take a moment to process that. Currently, the US has an excise tax on alcohol based on per gallon.

They should be taxed moderately high

A higher alcohol tax will force drinkers to pay more, regardless of how much they can afford to. This can cause a larger impact on the poor and those affected with alcoholism because they sometimes have an addiction for it and will have to dish out ... more of what little money they have left. Of course, it may also decrease the amount of drinkers in the future   more
8 votes
1 comment
They should be taxed moderately high - Voter Comments

debatability says2014-08-09T12:21:04.2641730-05:00
Report Post
Alcoholics will ultimately end up in the hospital at least once from alcohol poising. Taxpayer's money will pay for such medical bills covered by their insurance. It is only fair to tax alcohol a bit higher.
Vote & Comment
2

They should be taxed moderately low

A lower alcohol tax will allow alcoholics and the general populace to drink more. However, it will have a more positive effect on the poor and possibly middle class since they will have to dish out less money when buying alcohol. However, they will ... then buy in larger quantities, which can and will encourage intoxication   more
4 votes
3 comments
They should be taxed moderately low - Voter Comments

They shouldn't be taxed

The alcohol excise taxed is so low that it isn't even worth having it. Removing an alcohol tax entirely will allow people to drink more due to alcohol being cheaper and will also allow employers to buy more of it. However, this will encourage people...  to drink more and get intoxicated   more
4 votes
3 comments
They shouldn't be taxed - Voter Comments

cookie1 says2014-09-07T08:40:25.7177017-05:00
Report Post
WE NEED TO STOP MAKING DECOSIONS ABOUT OTHER PEOPLES BODIES. Seriously, let people do what they want with their bodies, we shouldn't be trying to force them not to do things by making them pay more for alcohol.

We should declare war on alcohol

Think about it: everyone who has drunk alcohol has died. Congress will sign a formal declaration of war against alcoholic beverages, hops, and possibly ethanol. In doing so, the US will attack alcohol service providers, burn down hop farms, and shoo... t any alcoholic beverage in sight. Those who are in possession of alcohol will be aiding the enemy and are thus considered enemies as well and will either be taken as POWs or shot on sight. In order to win this war, the US must remove alcohol from this planet or at least until a peace treaty can form. This will cause the US to invade other countries as well in order to wage war with alcohol on all fronts   more
1 vote
0 comments
We should declare war on alcohol - Voter Comments
No Comments
Vote & Comment
5

Alcohol should be illegal

Prohibition in the United States was a nationwide Constitutional ban on the sale, production, importation, and transportation of alcoholic beverages that remained in place from 1920 to 1933. It was promoted by "dry" crusaders movement, led by rural ... Protestants and social Progressives in the Democratic and Republican parties, and was coordinated by the Anti-Saloon League. Prohibition was mandated under the Eighteenth Amendment to the U.S. Constitution. Enabling legislation, known as the Volstead Act, set down the rules for enforcing the ban and defined the types of alcoholic beverages that were prohibited. For example, religious uses of wine were allowed. Private ownership and consumption of alcohol was not made illegal under federal law; however, in many areas local laws were more strict, with some states banning possession outright. Nationwide Prohibition ended with the ratification of the Twenty-first Amendment, which repealed the Eighteenth Amendment, on December 5, 1933. In the nineteenth and early twentieth centuries, the introduction of alcohol prohibition and its subsequent enforcement in law was a hotly-debated issue. Prohibition supporters, called drys, presented it as a victory for public morals and health. Anti-prohibitionists, known as wets, criticized the alcohol ban as an intrusion of mainly rural Protestant ideals on a central aspect of urban, immigrant, and Catholic life. Though popular opinion believes that Prohibition failed, it succeeded in cutting overall alcohol consumption in half during the 1920s, and consumption remained below pre-Prohibition levels until the 1940s, suggesting that Prohibition did socialize a significant proportion of the population in temperate habits, at least temporarily. Some researchers contend that its political failure is attributable more to a changing historical context than to characteristics of the law itself. Criticism remains that Prohibition led to unintended consequences such as the growth of criminal organizations, including the modern American Mafia   more
1 vote
0 comments
Alcohol should be illegal - Voter Comments
No Comments
Vote & Comment
6

They should be taxed severly

A high alcohol tax will discourage people from drinking, causing more and more people to stop drinking, but in time the tax will be virtually nothing if people stop drinking at bars and other alcohol service providers. This won't necessarily make pe... ople stop drinking and illegal bootlegger businesses can form   more
1 vote
0 comments
They should be taxed severly - Voter Comments
No Comments
Vote & Comment
7

They should stay as is

They should be taxed at the bare minimum

Taxing alcohol at the bare minimum will allow for a very small revenue and will encourage people to drink much more. This may not be worth it in the long run.
0 votes
0 comments
They should be taxed at the bare minimum - Voter Comments
No Comments
Vote & Comment
Leave a comment...
(Maximum 900 words)