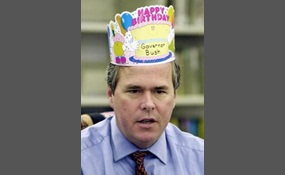 Should we let this make the country even more stupid or just ship him far away?

His brother started another war in the middle east and his father's father sold weapon materials to hitler. And then theres jeb the idiot who ruined florida and still some how continues to ruin it without even being there

Hey while we're at it lets set the children's hospitals on fire and blow up the moon. I mean if we're thinking big ridiculous ideas we might as well write them down too.
3 votes
2 comments
Lets make him president - Voter Comments

Whats a president? Like it even matters to me
2 votes
0 comments
Meh. - Voter Comments
No Comments
Vote & Comment
3

"personaly" lets just beat him with a garden hose and deport him to antartica.

Its my idea. And hes not president yet so no one can call me anything bad. But i still think its a good idea
1 vote
0 comments
"personaly" lets just beat him with a garden hose and deport him to antartica. - Voter Comments
No Comments
Vote & Comment
4

This is the vote you make if you want every thing to be fixed. Despite leaving the world to a idiot
0 votes
0 comments
Lets just off our selves and let him have the whole thing to president around - Voter Comments
No Comments
Vote & Comment
Leave a comment...
(Maximum 900 words)