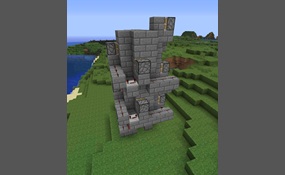 Minecraft is a sandbox indie game originally created by Swedish programmer Markus "Notch" Persson and later developed and published by Mojang. It was publicly released for the PC on May 17, 2009, as a developmental alpha version and, after gradual u... pdates, was published as a full release version on November 18, 2011. A version for Android was released a month earlier on October 7, and an iOS version was released on November 17, 2011. On May 9, 2012, the game was released on Xbox 360 as an Xbox Live Arcade game, as well as on the PlayStation 3, both console editions being co-developed by 4J Studios. All versions of Minecraft receive periodic updates.The creative and building aspects of Minecraft allow players to build constructions out of textured cubes in a 3D procedurally generated world. Other activities in the game include exploration, gathering resources, crafting, and combat. Gameplay in its commercial release has four principal modes:Survival mode, which requires players to acquire resources and maintain their health and hunger.Creative mode, where players have an unlimited supply of resources and experience, the ability to fly, and no health or hunger   more
7 votes
0 comments
Minecraft - Voter Comments
No Comments
Vote & Comment
2

A video game is an electronic game that involves human interaction with a user interface to generate visual feedback on a video device. The word video in video game traditionally referred to a raster display device, but it now implies any type of di... splay device that can produce two- or three-dimensional images. The electronic systems used to play video games are known as platforms; examples of these are personal computers and video game consoles. These platforms range from large mainframe computers to small handheld devices. Specialized video games such as arcade games, while previously common, have gradually declined in use. Video games have gone on to become an art form and industry.The input device primarily used to manipulate video games is called a game controller, and varies across platforms. For example, a controller might consist of only a button and a joystick, while another may feature a dozen buttons and one or more joysticks. Early personal computer games often needed a keyboard for gameplay, or more commonly, required the user to buy a separate joystick with at least one button   more
0 votes
0 comments
Video game - Voter Comments
No Comments
Vote & Comment
Leave a comment...
(Maximum 900 words)

MeIsMyName says2014-08-01T23:31:05.5250475-05:00
Report Post
People pay fro games for the experience, you are sure to die in almost every video game you play in, that doesn't mean they should all be free or cheaper, people need to make more video games for you to die in. : )
Privacy Policy | Terms of Use
Sitemap | View Desktop Version
©2020 Debate.org. All rights reserved.