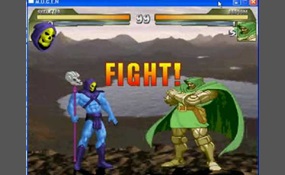 Supreme lord of Snake Mountain and wielder of the Havoc staff; Skeletor is an expert swordsman, a brilliant tactician, and is master of a vast army of mythical and demonic beings. Skeletor is immensely strong, a master of every known (and many unkno... wn) forms of magic and occult practices. He is well versed in the realms of science and hold secret knowledge of the universe. Skeletor serves evil for the sake of serving evil, and his ultimate goal is gain the knowledge held within castle Greyskull and to use it to dominate the entirety of the universe and beyond. Skeletor is a notorious spell-warrior and uses both the mystic arts and sheer brute force to obtain his goals. Skeletor's primary weakness is that he is prone to rage, as well as his overconfidence in the face of absolute victory   more
3 votes
1 comment
Skeletor - Voter Comments

King and ruler of the nation Latveria; Doctors Doom is a quite possibly the most brilliant mind on earth. He has studied and mastered the supernatural and occult magics of the world, is a genius in all forms of warfare, and an expert on all forms of...  weaponry ever devised. His army consists footsoldiers, WMDs (self proclaimed "doomsday devices"), and most notably a vast force of robotic replicas of himself. His suit makes him unnaturally strong and durable, and due to cosmic radiation he has obtained the ability to shoot electricity from his fingertips. In combat Doom is ingenious and unpredictable, becoming almost iconic for trap doors, weapons in random places (such as shooting missiles/lazers out of his fingertips), and a preparedness for seemingly any fathomable situation. Doctor Doom is a cunning and benevolent leader whose goal is to subjugate the multiverse to serve him and establish a utopian kingdom under his control. Doom's greatest weakness is his ego   more
2 votes
0 comments
Doctor Doom - Voter Comments
No Comments
Vote & Comment
No comments yet.
Leave a comment...
(Maximum 900 words)
Privacy Policy | Terms of Use
Sitemap | View Desktop Version
©2022 Debate.org. All rights reserved.