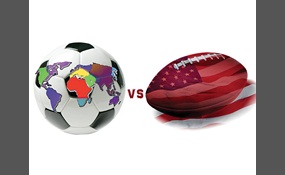 Is soccer better than footbal

Major League Soccer is a professional soccer league representing the sport's highest level in both the United States and Canada. MLS constitutes one of the major professional sports leagues of the United States and Canada. The league will be compose... d of 20 teams—17 in the U.S. and 3 in Canada. The MLS regular season runs from March to October, with each team playing 34 games; the team with the best record is awarded the Supporters' Shield. Ten teams compete in the postseason MLS Cup Playoffs in November and December, culminating in the championship game, the MLS Cup. MLS teams also play in other competitions against teams from other divisions and countries, such as the U.S. Open Cup, the Canadian Championship, and the CONCACAF Champions League. MLS is sanctioned by the United States Soccer Federation.Major League Soccer was founded in 1993 as part of the United States' successful bid to host the 1994 FIFA World Cup. The first season took place in 1996 with ten teams. MLS experienced financial and operational struggles in its first few years: The league lost millions of dollars, teams played in mostly empty American football stadiums, and two teams folded in 2002   more
11 votes
1 comment
Soccer - Voter Comments

Association football, more commonly known as football or soccer, is a sport played between two teams of eleven players with a spherical ball. It is played by 250 million players in over 200 countries, making it the world's most popular sport. The ga... me is played on a rectangular field with a goal at each end. The object of the game is to score by getting the ball into the opposing goal.The goalkeepers are the only players allowed to touch the ball with their hands or arms while it is in play and then only in their penalty area. Outfield players mostly use their feet to strike or pass the ball, but may use their head or torso to strike the ball instead. The team that scores the most goals by the end of the match wins. If the score is level at the end of the game, either a draw is declared or the game goes into extra time and/or a penalty shootout depending on the format of the competition. The Laws of the Game were originally codified in England by The Football Association in 1863. Association football is governed internationally by the International Federation of Association Football which organises a World Cup every four years   more
5 votes
1 comment
Football - Voter Comments