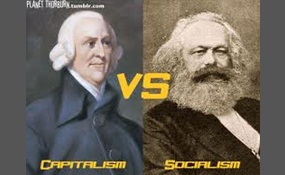 Capitalism is an economic system in which trade, industry, and the means of production are controlled by private owners with the goal of making profits in a market economy. Central characteristics of capitalism include capital accumulation, competit... ive markets and wage labor. In a capitalist economy, the parties to a transaction typically determine the prices at which assets, goods, and services are exchanged.The degree of competition, role of intervention and regulation, and scope of public ownership varies across different models of capitalism. Economists, political economists, and historians have taken different perspectives in their analysis of capitalism and recognized various forms of it in practice. These include laissez-faire capitalism, welfare capitalism and state capitalism; each highlighting varying degrees of dependency on markets, public ownership, and inclusion of social policies. The extent to which different markets are free, as well as the rules defining private property, is a matter of politics and policy. Many states have what are termed capitalist mixed economies, referring to a mix between planned and market-driven elements. Crony capitalism, is a state of affairs in which insider corruption, nepotism and cartels dominate the system. In Marxian economics this is considered to be the normal state of mature capitalism, while in anarcho-capitalist theory it is considered a political distortion of capital and markets   more
30 votes
7 comments
Capitalism - Voter Comments

the_unknown_debator says2014-05-10T12:48:39.0759806-05:00
Report Post
While no economic system will ever be perfect, Socialism has many more flaws than capitalism. If we create a society where wealth is distributed equally and everyone gets exactly the same, there is no motivation to work hard and earn more. Therefore, people would more than likely take advantage of this system and not work hard or even work at all which would be very bad the economy. Capitalism works better because it rewards people and lets them do whatever they want to do without being restrained ny the government

ILikeJefferson says2014-05-14T18:47:51.5861802-05:00
Report Post
Definitions are skewed. The individual has a chance to start a business. Defining Capitalism by only the rich, is like defining socialism only by the poor. With capitalism, I have a chance to succeed, based on my skills, my motivation. If I fail, it's my fault. If I win, my credit. Driven by something only an individual personifies. With socialism, the credit belongs equally to all...even those not helping.
Vote & Comment
2

Socialism is a social and economic system characterised by social ownership of the means of production and co-operative management of the economy, as well as a political theory and movement that aims at the establishment of such a system. "Social ow... nership" may refer to cooperative enterprises, common ownership, state ownership, citizen ownership of equity, or any combination of these. There are many varieties of socialism and there is no single definition encapsulating all of them. They differ in the type of social ownership they advocate, the degree to which they rely on markets or planning, how management is to be organised within productive institutions, and the role of the state in constructing socialism.A socialist economic system is based on the organisational precept of production for use, meaning the production of goods and services to directly satisfy economic demand and human needs where objects are valued based on their use-value or utility, as opposed to being structured upon the accumulation of capital and production for profit. In the traditional conception of a socialist economy, coordination, accounting and valuation would be performed in kind, by a common physical magnitude, or by a direct measure of labour-time in place of financial calculation. On distribution of output there has been two proposals, one which is based on the principle of to each according to his contribution and another on the principle of from each according to his ability, to each according to his need. The exact methods of resource allocation and valuation are the subject of debate within the broader socialist calculation debate   more
10 votes
2 comments
Socialism - Voter Comments

TheDesertFox929 says2014-05-10T10:53:55.9204638-05:00
Report Post
Socialism is much fairer and a much more efficient system than capitalism. I believe this largely because I believe it to be a horribly unfair way to organize society by saying that a small percentage of people should own the means of production and that everyone else should have to work for them or starve, its a form of slavery really. All that capitalism does is force the hardest working people in society to work to make someone else rich. Under socialism workers would own everything (contrary to popular belief that the government would). Under this society to get paid the value of what you produce, workers would democratically get to elect there leaders to represent them, and since everyone has a larger stake in the system it will increase productivity and innovation.

noahojeda says2014-05-13T14:31:36.5656847-05:00
Report Post
History has always shown a hard and harsh dictator in power if a corrupt in perfect socialist state we have never seen the ideal form of socialism, not yet at least