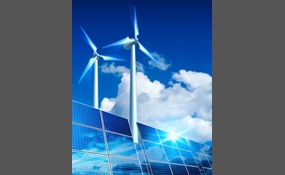 Solar energy is radiant light and heat from the sun harnessed using a range of ever-evolving technologies such as solar heating, solar photovoltaics, solar thermal energy, solar architecture and artificial photosynthesis.It is an important source of...  renewable energy and its technologies are broadly characterized as either passive solar or active solar depending on the way they capture and distribute solar energy or convert it into solar power. Active solar techniques include the use of photovoltaic systems, concentrated solar power and solar water heating to harness the energy. Passive solar techniques include orienting a building to the Sun, selecting materials with favorable thermal mass or light dispersing properties, and designing spaces that naturally circulate air.In 2011, the International Energy Agency said that "the development of affordable, inexhaustible and clean solar energy technologies will have huge longer-term benefits   more
13 votes
3 comments
Solar energy - Voter Comments

Wind power or wind energy is the energy extracted from wind using wind turbines to produce electrical power, windmills for mechanical power, windpumps for water pumping, or sails to propel ships.Large wind farms consist of hundreds of individual win... d turbines which are connected to the electric power transmission network. According to the recent EU analysis for new constructions, onshore wind is an inexpensive source of electricity, competitive with or in many places cheaper than coal, gas or fossil fuel plants. Offshore wind is steadier and stronger than on land, and offshore farms have less visual impact, but construction and maintenance costs are considerably higher. Small onshore wind farms can feed some energy into the grid or provide electricity to isolated off-grid locations.Wind power, as an alternative to fossil fuels, is plentiful, renewable, widely distributed, clean, produces no greenhouse gas emissions during operation and uses little land. The effects on the environment are generally less problematic than those from other power sources   more
3 votes
1 comment
Wind power - Voter Comments

Diqiucun_Cunmin says2015-04-15T04:07:26.4610567-05:00
Report Post
@Mathgeekjoe: That's right - in a way, since winds are caused by pressure differences, which can be caused by differences in solar radiation input. Winds always blow from a region of high pressure to one of low pressure according to the pressure gradient force. Air converges and rises where it's hot, and they sink and diverge where it's cold. When it diverges from a cold region to reach a warm region, that's the wind we experience (polar easterlies, westerlies, trade winds, etc.) With that said, differences in solar radiation input aren't the only factor affecting temperature; for example, monsoon winds are caused mostly by the differences between the specific heat capacities of land and sea; even if Asia receives the same amount of solar radiation as the Pacific, there'll still be monsoon winds because land gains and loses heat more rapidly. (I don't think we should be equating the two types of power BTW, if you implied that... :P) As for the poll, I think that's another false dichotomy. Each type of renewable power has its strengths and weaknesses each region should decide which one is better; there are no superior or inferior energies, and even judgements based on technological level will be dated in a few years anyway, given the speed of technological progression.