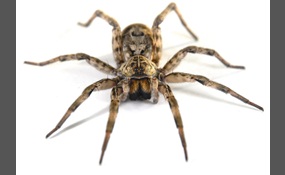 Mantis shrimp or stomatopods are marine crustaceans, the members of the order Stomatopoda. They commonly reach 30 centimetres in length, though in exceptional cases have been recorded at up to 38 cm. The largest ever caught has a length of 46 cm in ... the ocean near Fort Pierce, Florida of USA. The carapace of mantis shrimp covers only the rear part of the head and the first four segments of the thorax. There are more than 400 species of Mantis shrimp. They come in a variety of colours, from shades of brown to bright neon colours and are among the most important predators in many shallow, tropical and sub-tropical marine habitats. Despite being common, they are poorly understood as many species spend most of their life tucked away in burrows and holes.Called "sea locusts" by ancient Assyrians, "prawn killers" in Australia and now sometimes referred to as "thumb splitters" – because of the animal's ability to inflict painful gashes if handled incautiously – mantis shrimp sport powerful claws that they use to attack and kill prey by spearing, stunning, or dismemberment. In captivity, some larger species are capable of breaking through aquarium glass with a single strike   more
2 votes
1 comment
Mantis shrimp - Voter Comments

The Spawn of Ungoliant

Spider is a type of Patience game. It is one of the more popular two-deck solitaire games.
1 vote
0 comments
Spider - Voter Comments
No Comments
Vote & Comment
6

I am scared of spiders

1 vote
1 comment
I am scared of spiders - Voter Comments

Mathgeekjoe says2015-04-06T00:44:01.5497800-05:00
Report Post
Often also know as the daddy long legs, this spider tends to have small fangs and rarely bites people. It is venom is very weak even on insects. It is a very fast and nimble spider that has been known to eat venomous spiders. The Cellar spider silk is weak but it spins it quickly to encase pray. It has an irregular web. It also has a defense mechanism that it vibrates so quickly it becomes invisible to poor vision predators.
Vote & Comment
12

The brown recluse spider or fiddleback spider, Loxosceles reclusa, Sicariidae is a spider with a venomous bite.Brown recluse spiders are usually between 6–20 mm, but may grow larger. While typically light to medium brown, they range in color from cr... eam-colored to dark brown or blackish gray. The cephalothorax and abdomen may not necessarily be the same color. These spiders usually have markings on the dorsal side of their cephalothorax, with a black line coming from it that looks like a violin with the neck of the violin pointing to the rear of the spider, resulting in the nicknames fiddleback spider, brown fiddler, or violin spider   more
0 votes
0 comments
Brown recluse spider - Voter Comments
No Comments
Vote & Comment
15

Trapdoor spiders (superfamily Ctenizoidea, family Ctenizidae) are medium-sized mygalomorph spiders that construct burrows with a cork-like trapdoor made of soil, vegetation and silk. Some similar species are also called trapdoor spiders, such as the...  Liphistiidae, Barychelidae, Cyrtaucheniidae and some Idiopidae and Nemesiidae. Some Conothele species do not build a burrow, but construct a silken tube with trapdoor in bark crevices   more
0 votes
0 comments
Trapdoor spider - Voter Comments
No Comments
Vote & Comment
16

SpiderBabe is a 2003 softcore pornographic parody of Spider-Man. The film was written by John Fedele and Terry West, and directed by Johnny Crash. Erin Brown, better known within the genre as Misty Mundae, stars as the titular character.
0 votes
0 comments
SpiderBabe - Voter Comments
No Comments
Vote & Comment
21

Spiderbait are an Australian alternative rock band formed in Finley, a small town in rural New South Wales, in 1989 by bass guitarist Janet English, singer-drummer Mark Maher, and guitarist Damian Whitty. In 2004 the group's cover version of the 193... 0s Lead Belly song "Black Betty" reached number one on the ARIA Singles Chart. They have five top 20 albums: The Unfinished Spanish Galleon of Finley Lake, Ivy and the Big Apples, Grand Slam, Tonight Alright, and Greatest Hits. The group have won two ARIA Music Awards with the first in 1997 as 'Best Alternative Release' for Ivy and the Big Apples and the second in 2000 as 'Best Cover Art' for their single "Glokenpop". Since late 2004, the band has been on hiatus to concentrate on solo projects and their personal lives—although periodically returning for occasional gigs. The band released their first studio album in nine years, the self-titled Spiderbait in November 2013   more
0 votes
0 comments
Spiderbait - Voter Comments
No Comments
Vote & Comment
22