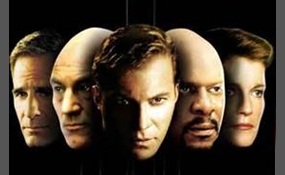 Star Trek Main Characters: Who Is The Best?

Between all of the Captains in Star Trek who is the best?

Kathryn Janeway, played by Kate Mulgrew, is a fictional character in the Star Trek franchise. As the captain of the Starfleet starship USS Voyager, she was the lead character on the television series Star Trek: Voyager, and later a Starfleet admiral... , as seen in the 2002 feature film Star Trek: Nemesis. Although other female captains had appeared in previous Star Trek episodes and other media, she is the only one to serve as the central character of a Star Trek TV series   more
1 vote
1 comment
Kathryn Janeway - Voter Comments

Jonathan Archer is a fictional character in the Star Trek franchise. He is the protagonist of the television series Star Trek: Enterprise, where he is portrayed by Scott Bakula. Archer also plays a major role in the formation of the United Federatio... n of Planets.Archer is the commanding officer of the first starship Enterprise from 2151 to 2161, and is later President of the United Federation of Planets from 2184 to 2192.According to a computer display in the episode "In a Mirror, Darkly", historian John Gill considered Archer "the greatest explorer of the 22nd century." The same display states that two planets were named after Archer: Archer IV and Archer's Planet   more
0 votes
0 comments
Jonathan Archer - Voter Comments
No Comments
Vote & Comment
6

jrrjacques says2014-04-03T13:45:05.5116133-05:00
Report Post
Was Sulu Captain of one of the Enterprises or become the main character of interest in his own series? His daughter was Captain of Enterprise NCC-1701B. Later Sulu did become Captain of the Excelsior NCC-2000 but never became captain of an Enterprise or made his own TV series. Though I do agree with you he is one of my favorite characters.
Privacy Policy | Terms of Use
Sitemap | View Desktop Version
©2021 Debate.org. All rights reserved.