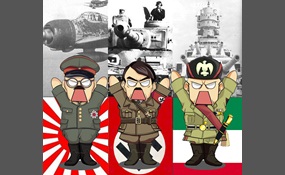 Strongest of the Axis Powers?

Nazi Germany and the Third Reich are names for Germany from 1933 to 1945, when it was under control of Adolf Hitler and the Nazi Party. Under Hitler's rule, Germany was transformed into a fascist totalitarian state which controlled nearly all aspect... s of life. Nazi Germany ceased to exist after the Allied Forces defeated Germany in May 1945, ending World War II in Europe.Hitler was appointed Chancellor of Germany by the President of the Weimar Republic Paul von Hindenburg on 30 January 1933. The Nazi Party then began to eliminate all political opposition and consolidate its power. Hindenburg died on 2 August 1934, and Hitler became dictator of Germany by merging the powers and offices of the Chancellery and Presidency. A national referendum held 19 August 1934 confirmed Hitler as sole Führer of Germany. All power was centralised in Hitler's hands, and his word became above all laws. The government was not a coordinated, co-operating body, but a collection of factions struggling for power and Hitler's favour. In the midst of the Great Depression, the Nazis restored economic stability and ended mass unemployment using heavy military spending and a mixed economy   more
9 votes
2 comments
Nazi Germany - Voter Comments

The Empire of Japan was a parliamentary constitutional monarchy, empire and world power that existed from the Meiji Restoration on January 3, 1868 to the enactment of the 1947 constitution of modern Japan.Imperial Japan's rapid industrialization and...  militarization under the slogan Fukoku Kyōhei led to its emergence as a world power, eventually culminating in its membership in the Axis alliance and the conquest of a large part of the Asia-Pacific region. At the height of its power in 1942, the Empire of Japan ruled over a land area spanning 7,400,000 square kilometres, making it one of the largest maritime empires in history.After several large-scale military successes during the Second Sino-Japanese War and the Pacific War, the Empire of Japan also gained notoriety for its war crimes against the peoples of the countries it conquered. After suffering many defeats and the atomic bombings of Hiroshima and Nagasaki, however, the Empire of Japan surrendered to the Allies on September 2, 1945. A period of occupation by the Allies followed the surrender, and a new constitution was created with American involvement   more
2 votes
1 comment
Empire of Grorious Nippon - Voter Comments

Romania, occasionally spelled Rumania, and formerly also spelled Roumania is a unitary semi-presidential republic located in southeastern-central Europe, north of the Balkan Peninsula and on the western shore of the Black Sea. It borders Hungary, Se... rbia, Ukraine, Moldova, and Bulgaria. It covers 238,391 square kilometres and has a temperate-continental climate. With its 20.1 million inhabitants, it is the seventh most populous member of the European Union. Its capital and largest city, Bucharest, is the sixth largest city in the European Union.Modern Romania emerged within the territories of the ancient Roman province of Dacia, and was formed in 1859 through a personal union of the principalities of Moldavia and Wallachia. The new state, officially named Romania since 1866, gained independence from the Ottoman Empire in 1877. At the end of World War I, Transylvania, Bukovina and Bessarabia united with the sovereign Kingdom of Romania. At the end of World War II, territories which today roughly correspond to the Republic of Moldova were occupied by the Soviet Union, and a few years later Romania became a socialist republic and member of the Warsaw Pact   more
0 votes
0 comments
Romania - Voter Comments
No Comments
Vote & Comment
4

The Kingdom of Italy was a state founded in 1861 when King Victor Emmanuel II of Sardinia was proclaimed King of Italy. The state was founded as a result of the unification of Italy under the influence of the Kingdom of Sardinia, which can be consid... ered its legal predecessor state. It existed until 1946 when the Italians opted for a republican constitution.Italy declared war on Austria in alliance with Prussia in 1866: despite an unsuccessful campaign, it received the region of Veneto following Bismarck's victory. Italian troops entered Rome in 1870, ending more than one thousand years of Papal temporal power. Italy accepted Bismarck's proposal to enter in a Triple Alliance with Germany and Austria-Hungary in 1882, following strong disagreements with France about the respective colonial expansions. However, even if relations with Berlin became very friendly, the alliance with Vienna remained purely formal, as the Italian were keen to lay hands on Trentino and Trieste, prosperous parts of the Austro-Hungarian empire   more
0 votes
0 comments
Italy - Voter Comments
No Comments
Vote & Comment
Leave a comment...
(Maximum 900 words)